Welcome to the PIDHS June Newsletter,

I hope everyone has come through the ʻcircuit breakerʼ lockdown, the wild storms, the loss of power and the terrifying floods relatively unscathed! The loss of power certainly occasioned me to think about how my own ancestors lived with none of the instant gratification that we have today. My ancestors in Rhyll had no instant heating, no instant hot water, no instant cooking and lighting was by candle or kerosene lamp, all part of everyday life up until the late 1950s, when electricity came to the township. This is a rather sobering thought, given how today we are so dependent on the grid ‒ a dependence that I personally intend to work on, especially given the predictions of increased storm intensity due to climate change.

On a lighter note, I would like to give a warm welcome to two new members of our Society, Elly Berryman, a direct descendant of Island pioneer families of George (pictured) and Catherine Smith and John and Isabella Cleeland. Elly has a great interest in the history of the Island. Her ancestors, George and Catherine Smith will certainly feature in a story in a future edition of this newsletter! Our other new member is Ellen Beatty. Ellen has a long association with Phillip Island and is also keenly interested in the history of the Island. Ellen has some wonderful recordings of oral history from old Islanders which she has recorded over the years and we welcome her contribution to our Society. 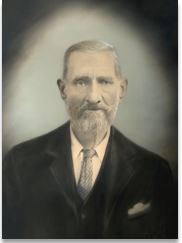 Speaking of oral histories, the Phillip Island Oral History project, spearheaded by Christine Grayden and conducted by local historian Dr Andrea Cleland continues, despite the obstacles of 2020 and 2021. Dr Cleland has interviewed quite a number of local identities and captured wonderful stories of life on the Island over the last 60 years covering different themes such as tourism, farming, business and lifestyle. Once edited, and provided permission has been granted by the participants, the transcripts will then go onto our website for everyone to enjoy.

Remember, the Phillip Island and District Historical Society depends on membership subscriptions, donations and grants to keep operating. This revenue ensures that we can continue to catalogue our collection, as well as embark on various projects which preserve and capture our regionʼs history. Spread the word ‒ New Members are welcome!

In this edition of our Newsletter, I have included a reprint of an article published in the June edition of the magazine VIBE and also continued the monthly instalment on the Pioneer Palaces of Rhyll. This instalment covers the second house we visited on the recent historical tour, namely Richardsonʼs Cottage, the original home of Bill Richardson. Finally, a quick update as to the progress of packing up the Museum... we have now packed over 100 boxes and beginning to see daylight. Unfortunately, the circuit breaker lockdown has hampered our wonderful progress, but this week will see us back on track heading down the home straight. Our thanks to the Phillip Island & District Genealogical Society for their support and co-operation in our move into the former kindergarten building ‒ which will be our joint homes until the opening of the new Cowes Cultural Centre towards the end of 2022. Enjoy! Pamela Rothfield Secretary 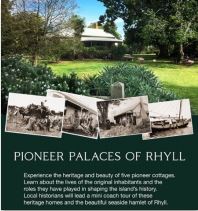 Bill Richardsonʼs Cottage Richardsonʼs cottage was originally built in 1876 as a wattle and daub hut by William Henry ʻBillʼ Richardson on land given to him by his father Joseph. Joseph Richardson, a councillor and Justice of the Peace, was a significant figure and landowner on Phillip Island, being one of the first pioneers to reside on the Island after it was opened up for subdivision in 1868. He and his wife, Sarah, had 12 children ‒ Bill was the eldest. Bill was a skilled jetty builder, boat builder and house builder. Further additions have been made including, what was at the time, the largest kitchen on Phillip Island ‒ able to smoke a full-sized pig. The former detached kitchen has today been transformed into beautiful guest accommodation. 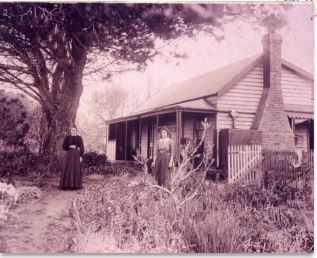 In 1887 Bill rebuilt the wattle and daub hut, transforming it into a pretty weatherboard cottage, which stands to this day, nestled amid a graceful old peppercorn tree and ancient pear tree. In that same year he married Alice Barnard. Bill and Alice lived in the cottage in Rhyll until, tragically, Alice died in childbirth in 1892. Within two hours of giving birth to their third child, a son, whom they named Joseph Barnard Richardson, Alice started showing signs of rapid deterioration. In response, Bill sailed desperately to San Remo and then to Bass in an attempt to locate the doctor, who he learned was somewhere in the Bass Hills. Bill returned to be with his wife at their home in Rhyll, and by the time the doctor arrived, Alice had died. Unfortunately, the baby, Joseph, died 8 months later.

Two years after Aliceʼs death Bill remarried, to Rose Laugher. Bill and Rose had a further five children, including a set of twins, all of whom grew up in Rhyll attending the local School, which was located in the Rhyll Mechanics Institute Hall. Bill built many of the cottages in Rhyll, a number of which stand today. He died in 1919 at the age of 65 years. 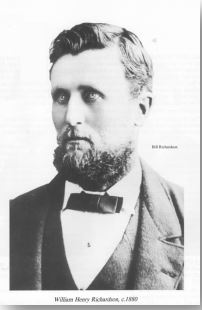 Members and friends - please note that the South Eastern Historical Association quarterly meeting which was scheduled to be held at Cowes on 20 June has had to be cancelled. 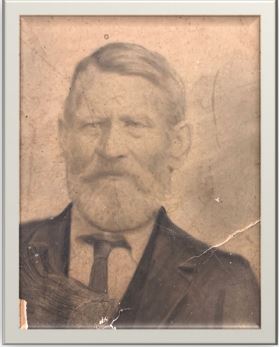 Who am I? This photograph (above) of a very interesting and so far, unidentified, gentleman was recently discovered in the Societyʼs collection. If anyone has an idea of who he might be, could you please make contact with the Society.

The Phillip Island and District Historical Society and Museum is moving house. Whilst the prospect of a brand new home in the new Cowes Cultural Centre upon its completion at the end of 2022 is exciting, the here and now of sorting, packing, boxing up, letting go and discarding is something the Society’s committee faces now.

Psychologists say that moving house has been ranked as one of the top five most stressful life events –and when one considers that the Society has been in its present location for almost forty years –it doesn’t take much imagination to work out the extent of the work being undertaken.Our collection, which has been accumulating since the Historical Society’s founding in 1967, gave rise to the establishment of the Museum in December 1982. Apart from the closure caused by the COVID pandemic in 2020, the Museum has been open to the public on regular days and also by appointment, continuously since its opening almost forty years ago.During the sorting process, which involves combing through thousands of items, a number of wonderful artifacts are being ‘re-discovered' in the museum's archives.

One such item is the map of Phillip Island which has the hand-written names of those who purchased parcels of land in the first land sales on the Island which took place on 2nd November 1868. 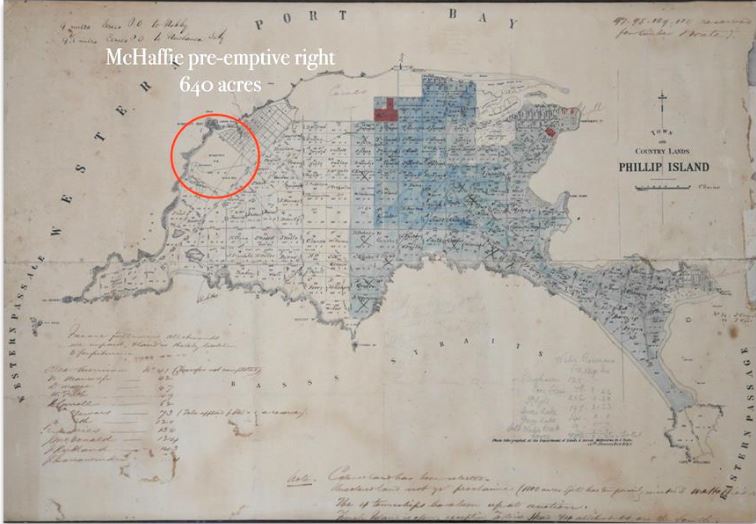 A description of the day’s event was detailed in The Argus on 3rd November 1868 , the following day:

“The whole of the proceedings passed off very quietly, and the manner in which the selections were conducted appeared to give great satisfaction. Mr. Murray, of the firm of Greig and Murray, who at first was not allowed to select, in consequence of the large quantity of purchased land already held by him, was subsequently allowed to take up an allotment which was left after all the other applicants have been satisfied. Although it is to be regretted, for more reasons than one, that the island is not to be retained as national property, there is this much to be said, -nearly the whole of the land selected yesterday has undoubtedly fallen into the hands of persons who intend to settle upon and cultivate it. Nearly the whole of the applicants were farmers, farm labourers, and hard-working men, or persons desirous of obtaining perhaps one of the best sites in the whole colony for a seaside residence. In a short time, it is rumoured that the rest of the island, with the exception of some reserves, will be sold by auction, and that the township allotments near the mussel rocks [later named Cowes] will also be disposed of in the same manner.”

Up until the land sales on 2nd November 1868, the Island was held under leasehold by the McHaffie brothers, John and William. The brothers arrived in Australia in about 1840 and within two years took possession of Phillip Island as pastoral tenants of the Crown under an annual License. The McHaffie brothers’ lease covered the whole of the Island, an area stated to be 26 square miles (some 16,640 acres), for which they paid ￡1 per square mile annually. William’s name remained on the lease despite leaving the Island in the late 1850s and returning to Scotland. In 1861, when an astute person discovered that Phillip Island was actually 32 square miles in area (not 26 square miles as shown on the McHaffies’ lease) he tried to secure the ‘available’ land of six square miles from the Government. John McHaffie hastily had the lease retroactively expanded to cover the total 32 square mile and repaid the back rent for the extra area.John McHaffie, supported by powerful friends in Government, fought to retain the leasehold for many years, but by 1868, the die was cast.John McHaffie and his wife Georgianna, faced the prospect of their leasehold of 20,000 acres (8,000ha) reduced to a mere 640 acres under squatter’s pre-emptive rights. This reduced land proved insufficient for John McHaffie to run his cattle and the following year, 1869, he bought a run at Yanakie on the Wilson Promontory isthmus. 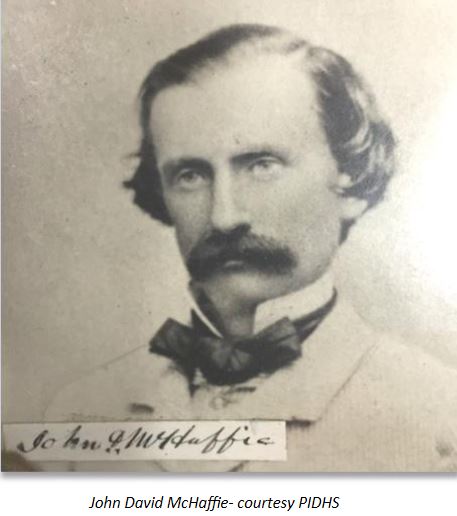 Despite divesting themselves of all their land interests on Phillip island by the 1880s, John and Georgianna McHaffie have an enduring connection to the Island and are remembered for their important contribution to its early development in the colonial period. Returning back to 2021 and our packing up process, I find we are guilty of being continually side-tracked, delving into the irresistible stories of those gone before us and rekindling the lives and memories of our Island’s past –including that of John and Georgianna McHaffie. I wonder and look forward to whatever will turn up tomorrow and where it will lead us. 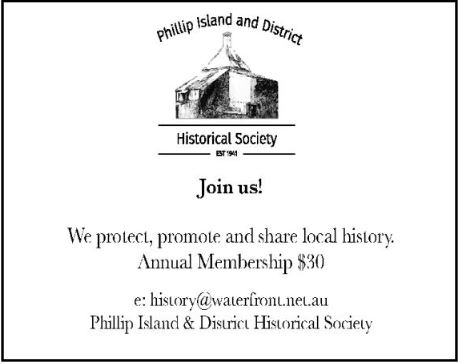