Ballot re-enactment a month away!!

To commemorate 150 years since the closer settlement of Phillip Island, the society is performing a re-enactment of the first land ballot which was held in the magistrates hall at Snapper Point (now Mornington) in November 1868. Our re-enactment will be in the Cowes Cultural Centre hall on Saturday 10th November, starting at 2 p.m. with some music, and the re-enactment starts at 2.30 p.m. Alot of the performers are actually descendants of the early settlers from the first ballot, which makes the performance very special. Meanwhile, members are getting their costumes ready. Photo shows our secretary, Christine Grayden,

having her first dress fitting with 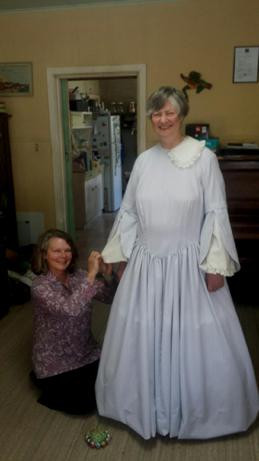 dressmaker Cora Elise van Dijke. All very exciting! Hope to see lots of you there.