One Phillip Islander from Rhyll who had a totally different experience of war service was Malcolm McFee, son of Stan McFee senior and Isobel May. 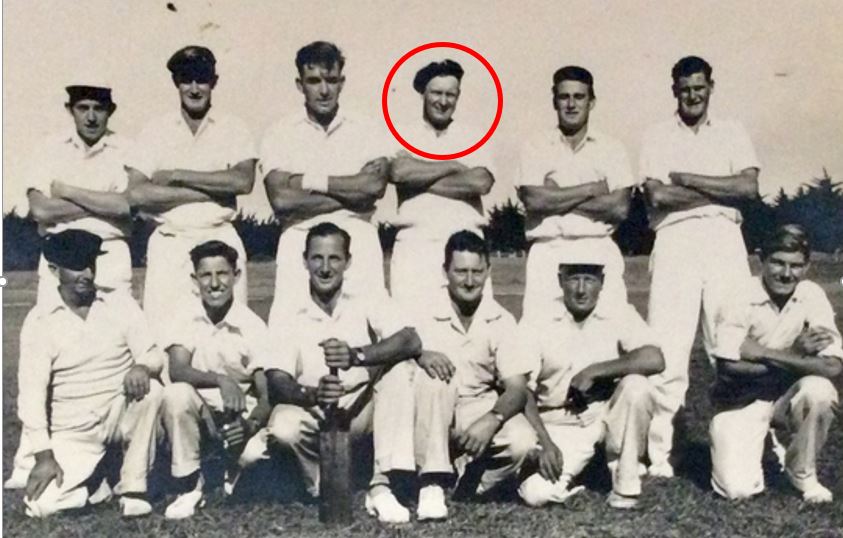 Malcolm (circled) was a brilliant cricketer before and after the war.

Malcolm lived and farmed with the family at “Long Point”, in McFee’s Road, Rhyll. They had worked horses there for years. Malcolm was a ‘born horseman’, who never raised a finger or his voice to a horse in his whole life. So at the start of the war when “things were looking pretty crook”, he decided to join the Light Horse based in Berwick.

By WW2, the once-famous and revered Australian Light Horse had mostly been disbanded or converted to other types of service such as tanks.

Exceptions were the hastily formed mounted 30-member section of the 6thDivisional Cavalry Regiment, who made history by converting from tanks to horses during the Syrian campaign. They were known as the “Kelly Gang” and included a radio operator, a cook and a gunner. The Kelly Gang used well-trained cavalry horses captured from the Vichy French, or Arab-breed horses acquired locally. They mainly patrolled in otherwise inaccessible Syrian terrain collecting intelligence on enemy positions.

The Kelly Gang on their acquired Arabian horses in Syria

In the New Guinea Campaign, the Independent Light Horse Troop did patrol duty and carried supplies where trucks or porters could not manage.

In Australia, officials thought a well-trained militia Light Horse with experienced horsemen such as Malcolm, could be useful for search and rescue and patrol on home soil in the event of a Japanese invasion.

But once Japan entered the war and Australia’s focus shifted to resourcing the Pacific War effort, a mounted Light Horse was not considered useful, and the Berwick group was disbanded.

In a video interview from 1995, Malcolm described the Light Horse at Berwick as ‘more or less a militia force’. The men were not in camp permanently, but had training sessions about once per month. When they were drilling there were 48 horses in each section, one behind the other, similar to a Police ‘musical ride’ with criss-crossing, or in groups of four forming lines and revolving around a centre, and then all horses moving together at all paces as one long row. This required a great deal of discipline from both horses and riders.

The Australian Light Horse carried a proud tradition from  WW1 from the famous Australian Light Horse charges. Possibly the most well-known is the 4th Light Horse charge at Beersheba when 800 horsemen in three widely spaced and disciplined lines cantered across three kilometres of open ground before all breaking into a gallop with bayonettes drawn and over-running the shocked Turks in their trenches who were expecting the horsemen to dismount and engage in hand to hand combat. The 4th Light Horse then captured the vital town, even though their superb Whaler horses had been without water for 48 hours.

Because of the impossibility of stabling horses in war zones, horses were tied in ‘horse lines’, by ropes from their halters at the front, and by one back leg so that they did not swing around and kick each other. 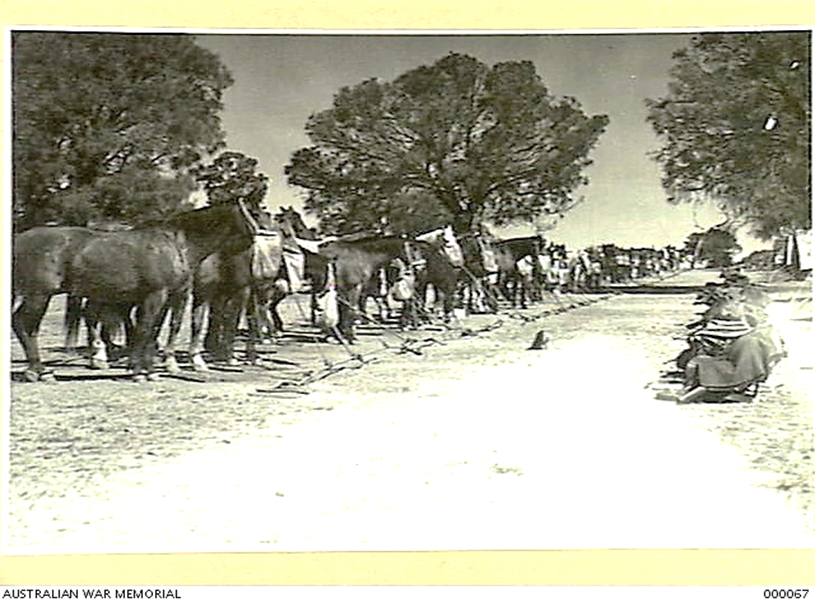 When not riding and training, Malcolm was involved with many aspects of the horses’ care. Due to the rigors of their training, some horses were injured or got sick, and Malcolm, being so familiar with horses from riding and using draught horses on the farm, was often called upon to assist the veterinarian. He also helped the farrier, and was later able to pass on the skills he learnt at Berwick to his son, Jim, who then obtained formal qualifications and was a local farrier for many years. Malcolm described these aspects of his service as “a lot of very interesting work, as you can imagine”.

Malcolm was in the Remount section, and was involved in training the horses, which had to be of a special temperament and extremely fit. The classic manual: The Training of aRemount by Lieutenant SJ Hardy, Royal Scots Greys, described the aim of producing a horse which could:  ”…march long distances with a heavy weight on his back, without losing condition. Then he must be used to exposure and privation; be capable of being ridden with only one hand at all paces and over all manner of country, in company and alone; be indifferent to the noise of firing, and able to stand still as well as gallop. In fact, we require the hardiness of a Basuto pony, the handiness of a polo pony, the steadiness of a good hack, and the spirit and energy of a hunter.”

This meant many hours in the saddle for Malcolm, including with horses just new to the horse line, young horses, and those recovered from injury or sickness. Training for horses and rider included groups of four horseman galloping to a battle zone, three dismounting and the fourth taking all horses in hand and riding them clear of the battle action until they were required by their riders again, when the handler would gallop all four horses back again. This required highly skilled riding, and highly trained horses. 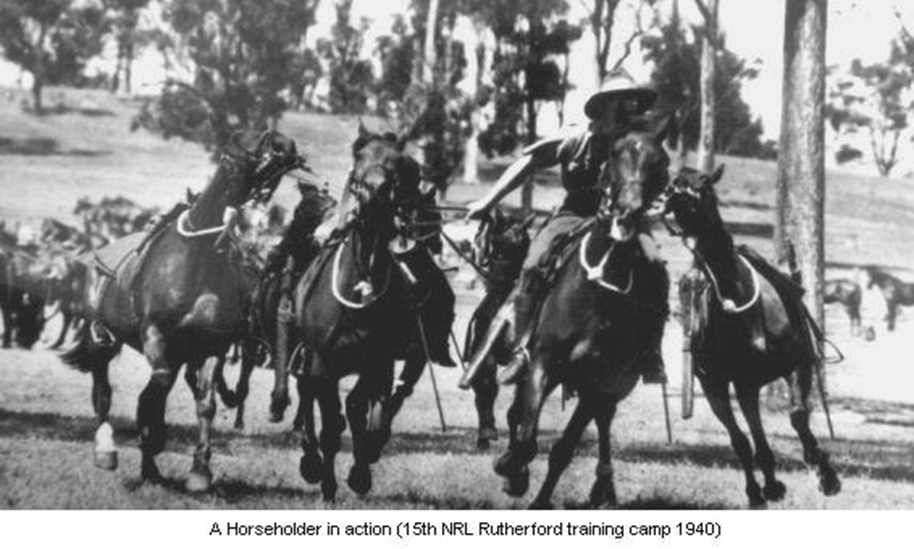 Another necessary part of the training for both men and horses was going on bivouacs, camping out for four days at a time. For one bivouac in the Western District they got caught in three days of non-stop rain, and only had one night under cover in a hayshed. “That was an exercise everyone was glad to see finish!” Malcolm declared.

Although Malcolm was sad to see the Light Horse groups either disbanded or converted to armoured units, he applied many of the lessons learnt in that period to his life after mounted militia service. Even in his seventies he was an active horseman, competing in horse events such as Quarter Horse cutting competitions, after purchasing his part-bred Quarter Horse “Rebel” from Bill Davis, the first person to import Quarter Horses into Australia.

Phillip Islanders who attended the Bicentennial street parade in 1988 in Cowes may well remember Malcolm mounted on Rebel, as they calmly walked down the main street among bands, trucks, clapping crowds, honking horns, revving cars and motor bikes; sometimes having to halt and stand still for several minutes. The image of Malcolm sitting deep in the saddle, totally relaxed, with Rebel on a fairly loose rein, alert but calmly looking around, has certainly stayed in my mind.

According to Malcolm’s son Jim, himself a horseman for many years, remembers Malcolm working teams of draught horses on the farm. The working horses were essential during WW2 when petrol rationing rendered farm tractors useless; although tractors certainly played an important role in war zones throughout the Pacific war. In his 1995 interview, Malcolm relates how petrol rationing meant an allowance of about 4 gallons per month, and tyres were unprocurable once the Japanese had gained control of 90 per cent of the world’s rubber plantations.

Interestingly, Malcolm never really talked to his family during his life about his short period of war service with the Light Horse. He returned full time to the farm, where the family had a contract growing carrots for the services and continued in farming on his Rhyll property for the rest of his life. 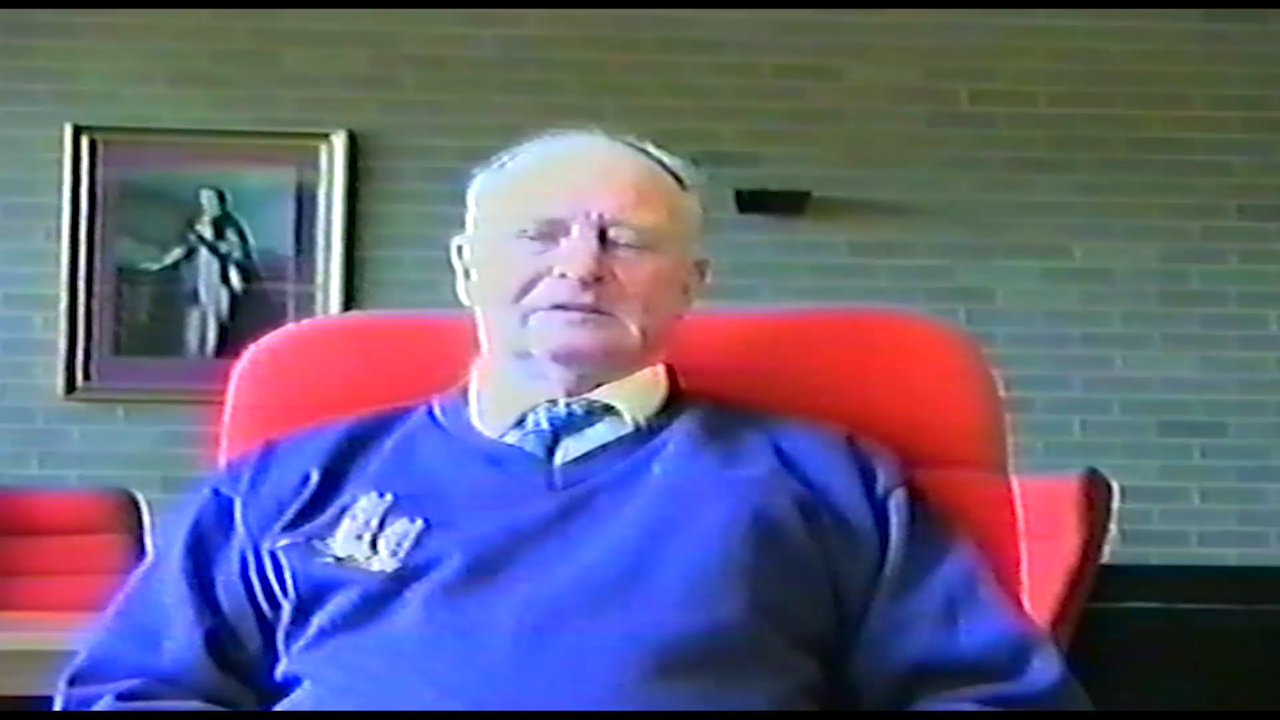