Former Phillip Island RSL president Les Lester had what it took to be a Lancaster pilot. He was daring, he was courageous, he loved a good time and most of all, he confronted challenges full on.

Les was leadership material from the controls of a heavily laden bomber plane; who traveled the skies of Europe in dangerous missions, hell bent on destroying the strongholds of Hitler.

Les was one of life’s colorful characters whose company was enjoyed by all, and who made the most of any situation. 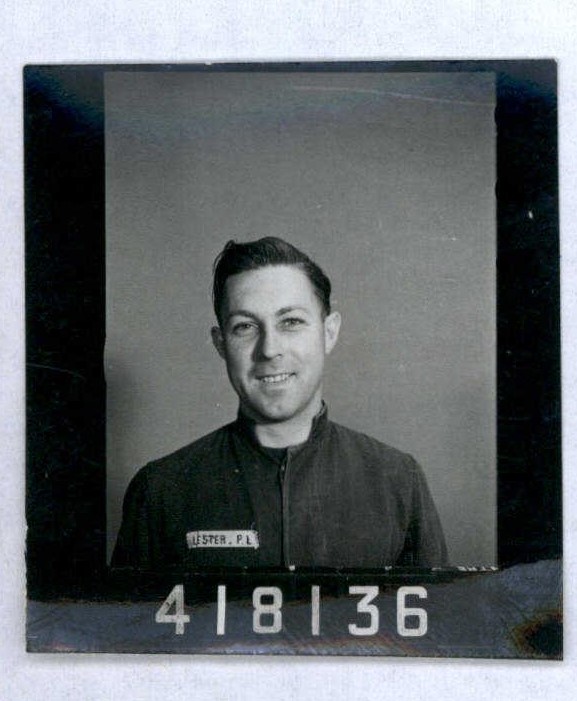 Les Lester belonged to an elite group of servicemen, the courageous and skilled aircrew of the RAF Bomber Command.

This Command was created in the early stages of the war  during the Battle of Britain when Britain was forced to save her shores from the incessant bombardments of the powerful German, Luftwaffe, Air Force.

It was in the latter three years of the war - 1943,’44 and ’45 - that Bomber Command played an effective and often under-rated role in the final capitulation of the German Empire.

On paper, Les Lester’s squadron, the respected and distinguished RAAF 460 squadron, was wiped out five times! In reality it was a case of life or death, as crew members knew that each sortie could be their last. With the odds stacked against them, the crews from Bomber Command lived and played hard, enjoying life to the fullest, at every opportunity.

Each mission was thwart with danger, and coming home safely was every airman’s prayer. 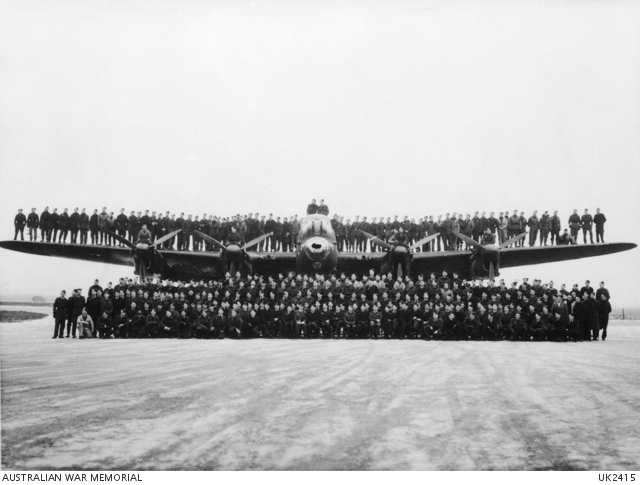 RAAF 460 Squadron posed on and in front of a Lancaster bomber.

The daily flying roster was checked each morning by Lester and his crew of six, to see if they would be taking off that day. If N-Nan was listed, they would spring into action. This would involve checking the plane, and then being briefed on the details of the night’s operation.

After the aircraft was loaded with its deadly cargo, often up to three tonnes of bombs, the crew would have a quick bite to eat before climbing inside. 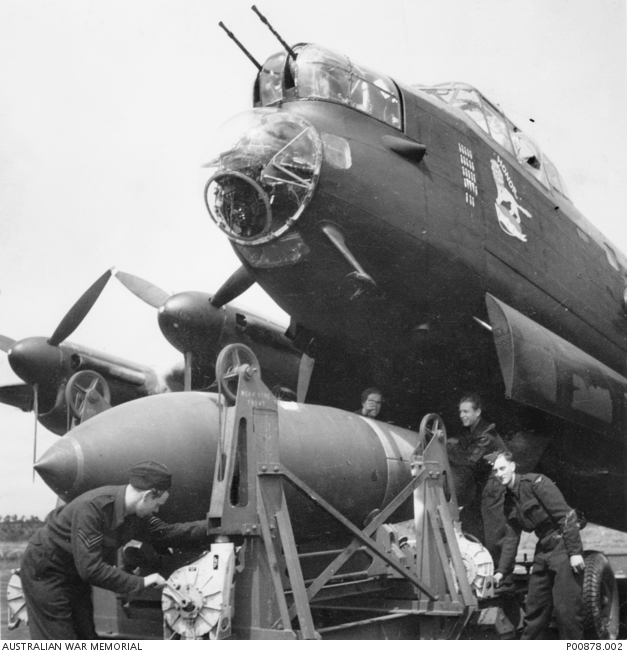 Loading a Lancaster with the biggest bomb they carried.

Even the act of taking off had its own hazards, as it could take up to one hour for the heavy plane to climb to a height of 22,000 feet. Out they would go through the dark, over the choppy waters of the Channel, and into the dangerous skies of Europe.

Many were pickings for the searchlights and planes of the awaiting German armies.

Precision and plain good luck played a huge part in these missions, as enemy planes would be at the ready to at all times. This, and the fear of colliding with their own planes, was the difference between life and death.

Each raid took between six and seven hours…….hours of concentrated flying and skilful teamwork. Conditions in the plane were less than ideal especially in the depths of winter when temperatures plummeted and the crew was chilled to the bone. 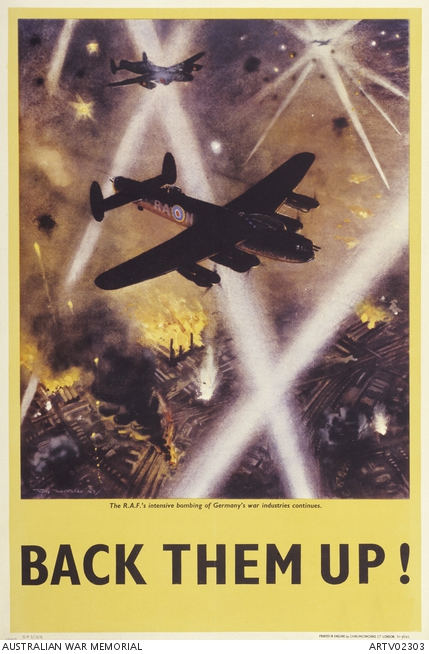 Poster in support of the .Bomber Command

Although he survived the war, Les Lester was never the same when he returned home to his family. Like so many of his time, Les took a long time to settle down and return to the routine and normality of family life. Les and his wife Nell retired to Phillip Island in 1977, and almost immediately became involved in the social life of the Phillip Island RSL club.

Les was president of the Phillip Island RSL club from 1997 until 2002. Nell was also involved in the Ladies Auxiliary.

Les passed away on Anzac Day 2003 at the age of 84 years. He was one of life’s true characters.