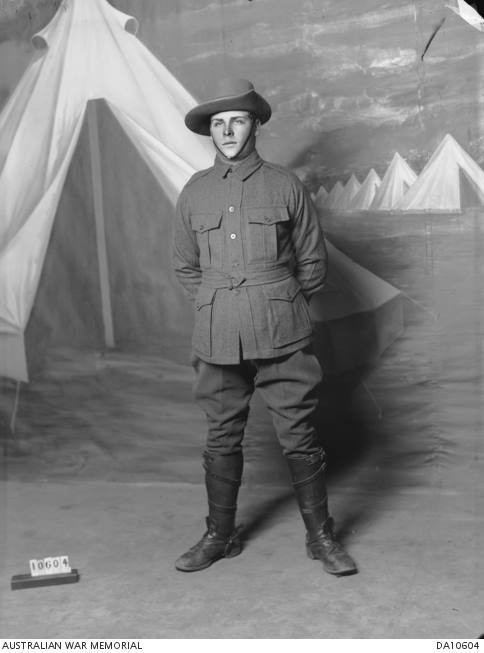 707 Gnr. William Percival Sheen was born at Cowes in 1897 to James Sheen and Susannah Walton.  He was a grandson of early settlers George and Harriet Walton.He was a labourer at Cowes when he enlisted on 8th December 1914 in Melbourne as a Trouper with the 3/8th Light Horse Regiment.  The unit embarked Melbourne on board HMAT A4 Pera on 8th  February 1915 and joined the 8th Light Horse Regiment in Egypt.

“When the Australian infantry units were dispatched to Gallipoli, it was thought the terrain was unsuitable for mounted troops, and the light horse regiments remained in Egypt. However, heavy casualties amongst the Australian infantry battalions resulted in the deployment of the 3rd Light Horse Brigade as reinforcements in May 1915.”

There is no record of William fighting at Gallipoli.He was invalided to Australia from Egypt on the Ceramic on 26th May 1915.  On becoming fit for duty he was sent to Seymour for re-allotment on 11th June.

William was living at Dunolly with his mother and re-enlisted as 1109 Pte. W. P. Sheen with the 5/13th Light Horse Regiment and embarked on the Ballarat for Egypt on 9th September 1915.

In November 1915 Willliam was transferred to the Composite Light Horse Regiment.  This was regiment was formed in just 12 hours to be ready for operations in the Western Desert.  Recruits came from Light Horse reinforcements undergoing training in Egypt and those recovering from illness or wounds.  Their task was to put down an uprising of the Senussi tribe.

He was taken on strength with the 13th Light Horse Regiment and on 18th March 1916 was transferred to the 2nd Divisional Artillery Column, part of the 2nd Division, at the training base at Zeitoun.

William embarked with the 2nd Division from Alexandria on 20th March, and disembarked at Marseilles on 27th March 1916. In April the Division was sent to a quiet sector south of Armentières to acclimatise to the Western Front conditions.

William was admitted to No. 7 General Hospital with mumps on 25th April, and was discharged 16th May.  He was transferred to Base Details, Calais on 20th May.

He rejoined the 2nd Divisional Ammunition Column in France on 29th July 1916,

They took over from the 1st Divisional Ammunition Column at Senlis on 30th July to supply the guns of the 1st and 2nd Division Artillery during the attack on Pozieres.

“In March 1917 the Germans withdrew to the Hindenburg Line and the 4th Brigade moved forward to Bullecourt. The Brigade moved to Flanders in June and was in constant action to November, supporting allied attacks on Messines, Menin Road, Polygon Wood, Broodseinde, and then Passchendaele, as part of the Third Battle of Ypres. During this period, the brigade suffered its heaviest casualties of the war, 151 in October and 145 in November, including killed, wounded, and evacuated ill.”

In March 1918 the 2nd Division helped halt the German offensive in the Somme  region.  William was gassed on 23rd March 1918 and was in hospital for two months.He was transferred to the 2nd Divisional Ammunition Column on 25th May 1918 and taken on strength with the 12th Battery 4th Field Artillery Brigade on 28th May.

In April the Germans broke through to Villers-Brettoneux and the 4th Brigade moved to the Somme.

“In August, when the Australian offensive began, the Brigade supported the infantry, as the I Australia Corps moved through Peronne, Mont St Quentin, Bellicourt,and the Hindenburg Line. Exhausted from combat and illness, the brigade was relieved on 18th  October.”

William proceeded to England on 7th December and returned to Australia on the Berrima embarking 14th December 1918.  He was discharged on 30th March 1919 and he returned to Maryborough working as a labourer.

He married Lillian May Roberts on 21st November 1921.

William died on 18th September 1971 at Maryborough and was buried in the Mayborough Cemetery.