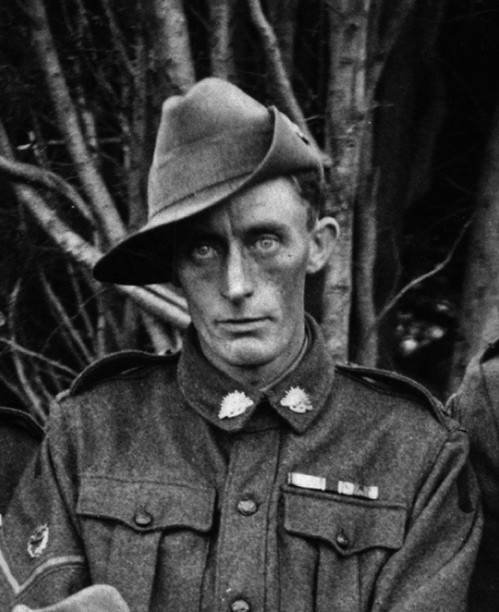 298 L/Cpl. Alexander Thomas McLardy was born in 1894 at Cowes.  He was a carpenter at Cowes when he enlisted with A Company 29th Battalion in Melbourne on 20th July 1915.  He embarked for Egypt on the Ascanius on 10th November 1915.

“The 8th Brigade joined the newly raised 5th Australian Division in Egypt and proceeded to France, destined for the Western Front, in June 1916. The 29th Battalion fought its first major battle at Fromelles on 19th July 1916.  The nature of this battle was summed up by one 29th soldier: “the novelty of being a soldier wore off in about five seconds, it was like a bloody butcher’s shop”. Although it still spent periods in the front line, the 29th played no major offensive role for the rest of the year.”

Alex was wounded in action at Fromelles on 20th July and was admitted to the 3rd Canadian General Hospital at Boulogne then the 4th London General Hospital with mild gun shot wounds to legs.  He was discharged on 5th December 1916.

He spent several periods in hospital then spent 7 months with the 8th Training Battalion at Hurdcott, Southampton.  He spent two periods with the 8th Brigade Works Unit then rejoined the Battalion on 22nd February 1918 at Kemmel.  Alex went to the Army Rest Camp on 25th July and rejoined on 23rd August at Morcourt.  He was promoted to Lance Corporal on 29th September.The 29th Battalion was disbanded on 12th October to provide reinforcements for other 8th Brigade units and Alex was transferred to the 32nd Battalion at Ramburelles.

Alex embarked for Plymouth, England on 14th February 1919 and left Liverpool for return to Australia on HMAT Wyreema on 13th April 1919.

Alex returned to Cowes after the war and continued as a carpenter.  He married Beatrice Walton at Cowes in 1921.  In 1927 he was a boarding house proprietor at Glencoe, Cowes and in 1931 was in South Yarra working as a painter.

He enlisted in the Second World War but no details are known.  Alex and Beatrice returned to live in Cowes in the 1960’s.

Alexander died at Canterbury on 3rd January 1971 and his ashes are at the Phillip Island Cemetery.