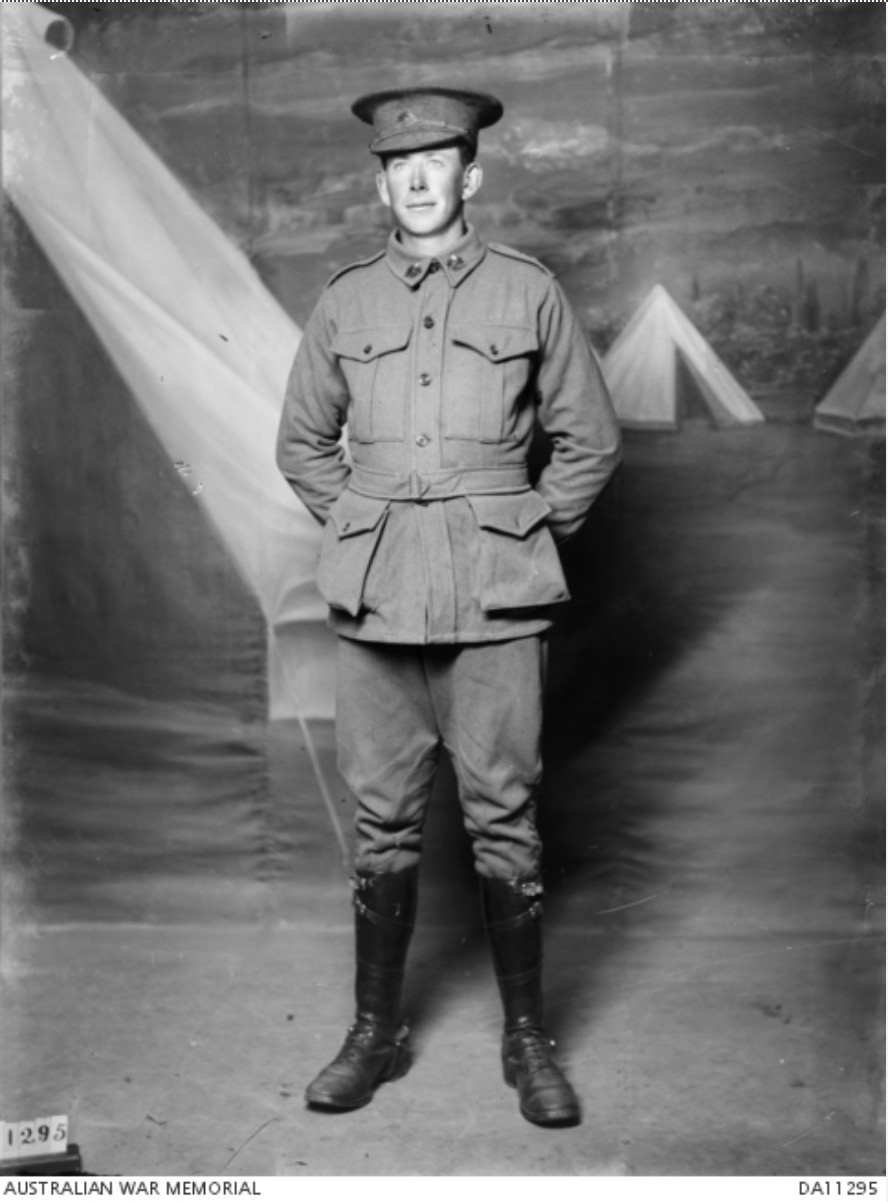 5803 Dvr. Terence Vere McHenry was born in 1891 in Essendon.  He was farming at Innis Howen, Ventnor, before enlisting in Melbourne on 30th Jul 1915 with the 11th Reinforcements of the 1st Divisional Ammunition Column, part of the 1st Division.  They embarked on HMAT Nestor on 11th October 1915.

He was taken on strength of the Divisional Ammunition Column and posted to No. 3 Section, Canal Defences, Cairo, on 12th November 1915.

The Division proceeded to join the British Expeditionary Force on 26th March and disembarked at Marseilles on 2nd April.

“In March 1916 the Division moved to France, taking over part of the line in the “nursery sector” around Armentieres.  On 23rd July 1916, it joined the Somme Offensive, capturing the town of Pozieres at great cost.  A second tour of Pozieres followed in August and a third at Flers in October after a rest break in the Ypres sector.

In 1917 it was involved in the pursuit of the Germans to the Hindenburg Line.  While maintaining outposts close to that line around Lagnicourt, the division was struck by a powerful German counterattack on 15th April 1917 and beat it off.  In May it relieved the 2nd Division in the 2ndBattle of Bullecourt.

After a rest spell, the division returned to the Ypres Salient and participated in the 3rd Battle of Ypres, in which it fought with great success at Menin Road in September and Broodeseinde in October 1917.”

He was taken on strength of the 13th Field Artillery Brigade, 5th Division and posted to Brigade Headquarters on 5th Feb 1918.

“In March 1918 the 5th Division was rushed to the Somme region to help stem the German Offensive. There it guarded the vital Somme River bridges. In April it counterattacked at Villers-Bretonneux, recovering the town.

The 5th Division fought in the Battles of Hamel in July and Amiens in August.”

Terence was granted leave to the UK on 10th August and was admitted to the 1st Australian Dermatological Hospital on 22nd August 1918.  He was discharged from hospital to the Central Training Depot, Park House, on 28th September 1918. Park House, situated close to Tidworth, became a depot for the AIF, housing training battalions as well as engineers and signallers, its Army Service Corps and Army Medical Corps.

He marched into No. 1 Command Depot, Sutton Venyon 8th October and marched out to the Overseas Training Brigade at Longbridge Deverill on 15th October to harden up for life back in the trenches.

On 1st November he marched into the Reserve Brigade Australian Artillery at Heytesbury, an artillery training base on the edge of Salisbury Plain.

“Australian soldiers arriving in France, whether reinforcements or “casuals” (those returning from hospitals), went to Base Depots before deployment to the front. All drafts, although they had already passed in England as fully trained, were subjected to further tests, a strict medical check, and at least ten days of additional training.”

He rejoined the 13th Field Artillery Brigade at St Souplet in France on 18th December.

Terence marched out to England 14th Feb 1919 and left for Australia on HT Wyreema on 13th April, disembarking at Melbourne on 31st May.

He returned to farming at Cowes and moved to Lilydale around 1930 continuing farming. He died at Healesville on 23rdJuly 1966 and was cremated at Springvale.