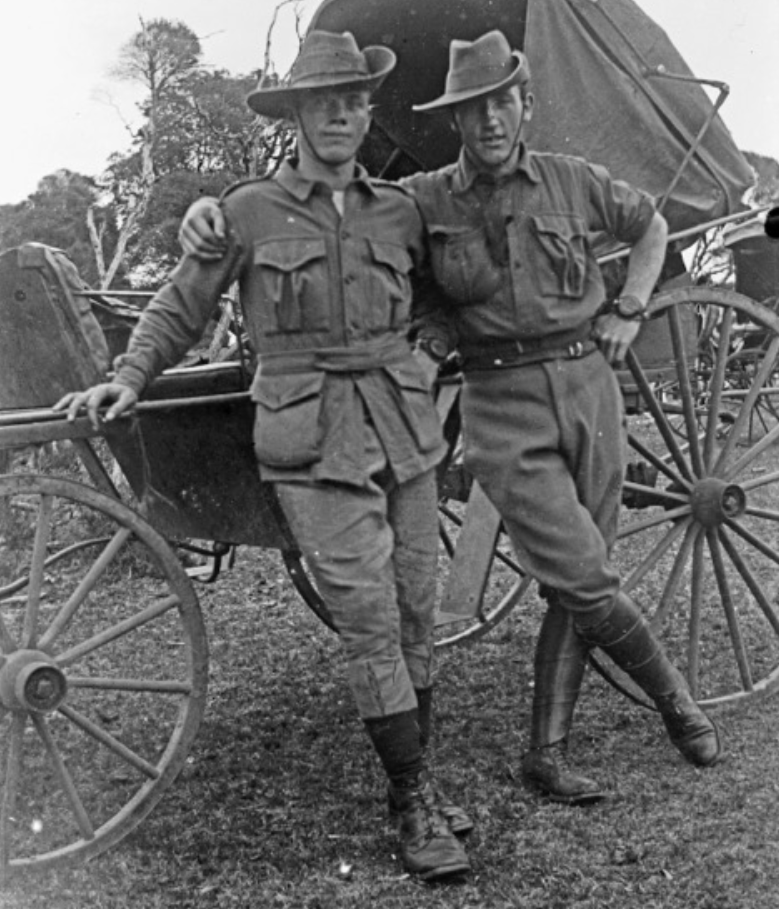 520 Pte. Charles Craft (at left) was born in 1895 in Poplar, Middlesex, England. Charles spent 10 months on the Training Ship Arethusa.  The ship was used to train young boys for a career in the Royal Navy or Merchant Navy.  He emigrated from London arriving at Sydney on the Wakool on 16th December 1911.   He was a farmer at Ventnor probably working for the McHenry’s at “Inishowen” before the war.  He enlisted in Melbourne on 23rd February 1915 and joined C Company, 23rd Battalion.

“The 23rd Battalion was raised in Victoria in March 1915 as the 3rd Battalion of the 6th Brigade.After initial training, Charles left Australia on 10th May 1915 on the Euripides and arrived in Egypt, where the Battalion would complete its advanced training, in June.

As part of the 2nd Australian Division, the 6th Brigade landed at ANZAC Cove in early September.The 23rd Battalion was soon manning one of the most trying parts of the Anzac front line - Lone Pine.The fighting here was so dangerous and exhausting that battalions were relieved every day.  The 23rd manned Lone Pine, alternating with the 24th Battalion, until they left Gallipoli in December 1915.

The battalion was next “in the line” on 10th April 1916, when it occupied forward trenches of the Armentieres sector in northern France.

On the night of 29th-30th June 1916 at Rue de Bois near Hazebrouck France, Charles was part of a raiding party on enemy trenches in which 80 enemy were killed.  Only one of the 23rd Battalion was killed and four were wounded.  One of those wounded was Charles who received a severely shattered femur from a gunshot.  He was admitted to the Brook War Hospital, Woolwich, England.

He embarked on the Euripides on 21st July 1917 from England for return to Australia.  He was admitted to the 11th Australia General Hospital at Caulfield on 20th September 1917 and was discharged from the Army on the 26th December 1917.

In 1926 he married Alice Beatrice Richardson of Cowes.  His occupation on the Electoral Roll was farm labourer.  Charles died on 18th April 1969.  He was cremated at Springvale.

Charles’ brother Pte. John George Clarke was in the British Navy for 15 years before enlisting from Swan Hill in the Australian Army on 23rd November 1914.  He was medically unfit and returned to Australia and was discharged on 6th July 1915.  He died at Canning Town, England on 24th November 1918.