Harry Jenkins was born in 1883 in Abbotsford. His WWI record was later to describe him as a “natural born British subject”. At the age of 18, in 1901, he enlisted in the 2nd Regiment, Scottish Horse as a trooper to fight in the Anglo-Boer War. It seems likely that Harry was of Scottish descent and an expert rider, in order to be recruited to this regiment.

The 2nd Scottish Horse, under Colonel Benson, “speedily became one of the best corps in the country”. In July they captured wagons and horses from Viljoen’s Commando and captured a large number of armed Boers and were praised by Kitchener. In September at a farm called Brakenlaagte, they came into a conflict with a force under General Louis Botha and were involved in the unsuccessful defence of an artillery battery. Two companies lost 73 officers and men including Colonel Benson.

War service was perhaps something of a gap year for Harry and its seems likely that on his return, he enrolled in Dentistry studies, either at the Melbourne Dental Hospital or the Melbourne University Faculty established in 1904.Perhaps Harry transferred his horse riding skills to motor cycles. We know that he competed and won in a motor cycle carnival in Sydney in 1910.

In this period Harry established his dental practice in Collins Street. He married Alice May Gahan in 1911. She was born in Collingwood Gahan in 1883 of a Scottish father so this may have been the network which brought them together. Their son Ted, (Edward Harry) was born in 1916.

In late 1916 Harry enlisted in the Australian Flying Corps, No.4 Squadron. He signed up at the Town Hall and he may have had hopes of becoming a pilot. However, it is clear that he had no previous flying experience as he was given the rank of private and promoted to temporary sergeant just before embarkation on the RMS Omrahon 17 January 1917. He arrived with his squadron at Castle Bromwich near Birmingham designated as an MT Driver.

He was promoted to sergeant on 1 July and posted to the AIF HQ in London for promotion to lieutenant in the Dental Corps. After this he served in a number of dental units in Britain and France and was promoted to captain in August 1918. Conditions in many of the dental units were quite primitive, operating in tents by lamplight. Harry visited Italy and came down with mumps, and was discharged in October 1919.

We have no further signs of Harry until the 1929Australian Motor Racing Grand Prix in 1929. He came 4th overall and first in class D in a Bugatti Type 30. The race was won by Arthur Terpich in a Bugatti Type 37A s/c. The medal awarded to Harry is on display at Churchill Island. It should be noted that in 1929 he was 46 years old. Perhaps it was this competition at Phillip Island that later made him look to that area and buy Churchill Island.

Two years later, now 48, he was in London with Harold Jeffrey. They had sailed from Melbourne to England with the intention of purchasing a DH.60 Moth to make a holiday flight to Australia for resale. Instead they purchased the Desoutter, which gave them enclosed cabin comfort and dual controls. Jeffery was aged 41 years, a director of Dimmeys Department Store in Richmond, Melbourne and was a commercial pilot who had flown in the Australian Flying Corps over the Western Front in the First World War.

Vacuum Oil Company sponsored their trip in exchange for publicity articles in papers along the route. This must have been a huge adventure for the time, as many ‘airports’ must have been very  primitive. Their route took them with frequent stops down through Europe, across the Middle East to India –  where they stopped for nine days to go on a tiger hunt with a Rajah – down through South East Asia to Darwin and then down the Eastern Seaboard of Australia to Melbourne.

There they sold the plane to the founder of what became Ansett Airlines, and that same plane flew the Launceston to Flinders Island route as “Miss Flinders” for many years, and is now on display at the Queen Victoria Museum in Launceston.

Harry bought Churchill Island in 1963 as an interest for his son Ted who had been left a paraplegic after an accident – either through diving or through ice hockey we are not sure. Ted had many friends, especially through his interest in ham radio, and they visited him when Harry, Ted and Ted's nurse Sister Margaret Campbell, were in residence on the island each summer.

During WW2, when most of Ted’s friends enlisted for war service and ham radio was banned, Ted and Sister Campbell ran Churchill Island as a Shorthorn dairy farm. They milked for cream, and Sister Campbell had to carry the heavy cream cans, load them on the carryall of the tractor, drive them down to the boat, motor across to the end of Churchill Road, where Harry owned 10 acres and kept cars and a ute in a shed, load the cans onto the ute, drive them to the Phillip Island Rd, and lift them onto the stand for the cream truck to collect. Eventually this did not turn out as expected, so Harry sold all the Shorthorns in a clearing sale at Cleeland’s property, and bought Herefords.

By 1958 it was obvious that a bridge would have to be built. Typical of Harry he bought an old pier from Port Melbourne and employed a contractor to build the bridge with those timbers. Disaster struck when the rotten timbers gave way and the contractor’s tractor fell through to the mud, pinning him and drowning him in the mud. After some delay, Ports and Harbours finished the bridge with better timber.

In the 1950s Harry made a lot of money by investing in a gold mine at Tennant Creek in the Northern Territory. The mine made £900,000 in the first few years of operation, but it is unclear how much Harry made out of the venture. Also around this time, Harry was an influential figure in the Australian Crocodile Shooters Club, and at one stage had a partner in the crocodile skin business. In the Churchill Island collection we have home movie footage of them in the Northern Territory, hunting and skinning crocodiles, drying the skins, and loading them in large rolled bales onto a boat for transport to Darwin. Christine showed an excerpt from this footage. She also showed a photo of a huge crocodile – approximately 6 ½ metres long – which Harry had shot on one of his shooting expeditions to the Northern Territory. 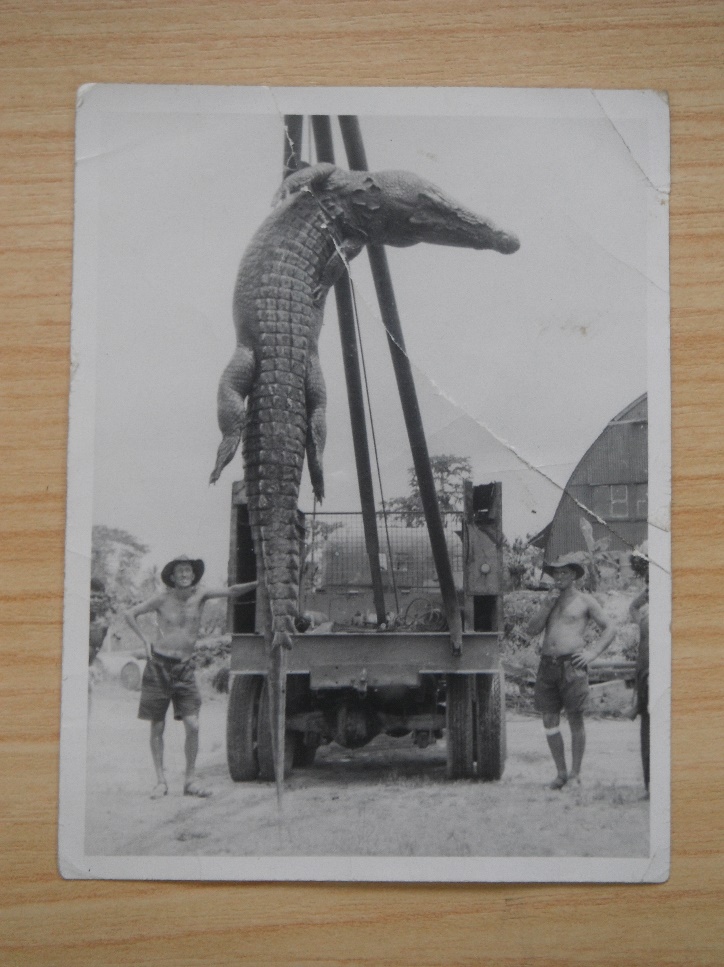 Harry Jenkins at left, with one of the larger crocodiles he shot during the 1950s.

Life on Churchill Island during the Jenkins years was highly sociable, with lots of visitors, partying and firing the cannon every New Year’s Eve. The household kept informal hours, rising late in the morning and partying til late at night. They had many friends in the local area, and both Harry and Sister Campbell were well known speedsters as they flew around in Bugattis, Rileys, and other such expensive, fast cars.

At one stage they had turkeys on Churchill Island, and seemed to tolerate the locals helping themselves around Christmas time. Ted’s friends eventually married and brought their own children down for weekends and Summer holidays, and many of those children still remember the wonderful times they had during the Jenkins era.

With thanks to David Maunders for information on the early years of Harry’s life, and his war service.

Gaye Cleeland gave the vote of thanks, saying that her father and other members of the family were great friends of the Jenkins family and Sister Campbell and the talk had brought back many memories of family stories.