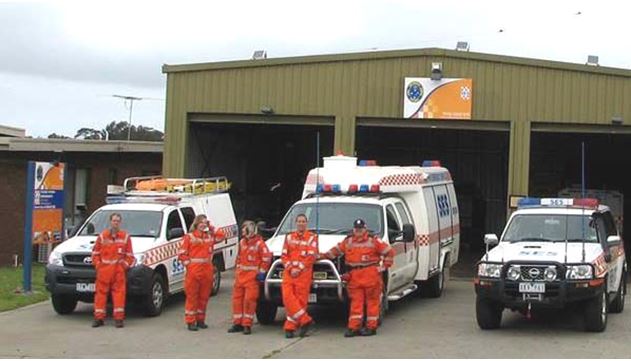 Robyn Mylius, on the history of the State Emergency Services, Phillip Island Unit, and the various tasks and work they do in the community.

Robyn and her husband and four children moved to Phillip Island from Melbourne nine years ago. Robyn has just begun her 8th year as a Scout Leader, has been a volunteer with the CFA for 5 years, and a volunteer with the SES for three years. She volunteers because she loves learning new things, helping in the community and the network of mates she has.

One of the most important things for the public to remember is to call 132 500 for storm damage or triple 000 for other emergencies.

An emergency is defined as an incident or situation that your personal resources alone cannot cope with – for example, storm damaged, burst hot water system, road crash, becoming trapped in a lift or structure, fire, injury.

In 1950 the Victoria Civil Defence organisation was created to provide a response to major emergencies in Victoria. It is still the agency responsible for flood, storm, tsunami and earthquake responses today.

By 1961 the Victorian Premier’s Dept had a Civil Defence Office, and each municipality around the state should form a civil defence unit. In 1962 the Premier ensure that a State disaster plan was created to manage peacetime disasters after the disastrous fires in the Dandenongs.

Around 100 voluntary Civil Defence Units had been established across Victoria by 1972. In that year Parliament passed the State Emergency Services and Civil Defence Act to formally legislate its role.

1973 Civil Defence Organisation got its first headquarters at 31 Queens Rd Melbourne, and it was renamed the Victoria State Emergency Service, in line with other States.

In 1979 Peter Alexander (jock) Welsh was the founding member of the Phillip Island SES unit and first Controller from 1979-1986. The Unit is located in Settlement Rd, next to the old Ambulance station and CFA station.

Who are we? We are diverse, but have one thing in common: we want to help our community be safe. We are VOLUNTEERS – we do not get paid. We give our time and energy to train to learn and practice our skills, and attend what can be traumatic incidents for us as well as those involved in the emergency. We may be lucky enough to have employers that will pay us while we go out to incidents. We are tradespeople, hospitality workers, small business owners, supermarket employees, students, retirees.

What do we do? We provide an emergency service for the Phillip Island community, in conjunction with other agencies – ALL HAZARDS, ALL AGENCIES. This includes the Country Fire Authority, Victoria Police, Ambulance Victoria, Bass Coast Shire Council, Red Cross, Dept of Environment, Land, Water and Planning (formerly DEPI), and any other relevant agencies, depending on the scale and nature of the emergency.

We drive the SAFETY FIRST message to all members.

Black Saturday and the following Royal Commission changed the emergency services landscape for the better. We now have the Emergency Management Victoria EMV in charge of all emergencies, rather than confusion and doubling up of various agency roles.

Our uniforms are made from Proban treated material, our helmets contain Kevlar and our boots are the same as ‘Fireys’ use for fighting wildfires, so we can assist at a wide range of incidents.

How do we get trained? Unit trains members weekly and ensures skills are maintained – General Rescue, Rooftop Safety, Storm & Flood, Working at Heights, then they are assessed by other  Unit’s assessors. We train with other Units (including CFA brigades) and that way we get to know them so we work better together at incidents. There is a number of other training courses which can be undertaken:

General Rescue to be an operational member. Storm & Water damage is next with a Working at Heights component optional. First Aid is mandatory and is done every year. Chainsaw is essential to storm damage work. Road Crash Rescue – perform extrications safely; Work Health and Safety – essential for any further courses. Certificate IV in Training & Assessing – to supervise training of members. Land Search – how to search for missing people. Map & Navigation assists with searching or operating in bush. Manage Traffic at Operations keep our crews safe clearing trees near/on roads. Urban Search & Rescue Cat 1 to search for people near surface of structure collapse. Cat 2 MFB these teams go interstate/overseas to earthquakes etc.

As Controller I have also done courses with VicPol for Evacuation and other topics, and in Emergency Management run by SES but with many agencies represented.

How to become a member: You don’t need any special skills, but have a willingness to help others, to train, and to know your limitations – i.e. if there’s something you don’t like or don’t feel comfortable doing then you just say so.

Once you’ve signed up you must pass a Police check; you can’t do any training or get your protective gear until then.

We have access to excellent Peer Support and counselling to help us cope with some of the traumatic incidents we are involved with.

What we do: Mostly Storm Damage, assisted by Shire and Ausnet crews. Fortunately, Road Crash Rescue is only a small part of our work. We provide lighting for events in the Shire like the Jazz Festivals at Ramada, and the Interchurch Council’s Carols by the Bay in Cowes.

We support CFA, Police and Ambulance officers with fires, crime scenes and other incidents like searching for missing people and rescuing people. We sent a “Chaps and Chainsaws” team to help Kinglake landowners cut up fire-damaged trees from their properties after the 2009 Black Saturday fires. For the Kerang Floods in 2011 we worked with the Army and the CFA to sandbag the power station. For the Orbost Complex fires 2014 we sent a Staging Area  Manager for the night shift and our Controller went to two Fire Base Camps to provide logistical support.

We are also part of the Shire’s Municipal Emergency Management Plan Committee.

Graeme Clauscen gave the vote of thanks, saying that Robyn’s talk had been very thorough and told us much that we did not know. Members thanked Robyn with acclamation and a gift.