Shipwrecks of the Phillip Island coast

John Jansson spoke on “Shipwrecks of Phillip Island”. Members were joined by many members of the public and a large group of students and staff from Flinders University maritime archaeology course. Some of the newspaper reports on wrecks described were as follows:

“Total Wreck of the Levin Lass”

We have to report the loss of the brig Leven Lass, 184 tons, Robert Nichol, from this port, bound to Melbourne, she having sprung a leak at sea, which the crew were unable to subdue.  The captain, with the hope of saving the crew and cargo, made for Phillip Island, Western Port, where she drove on shore.  A great part of her cargo was saved.  No hands lost, but the vessel is a total wreck.  The Leven Lass left Hobart Town on the 24th ultimo with the following cargo :- 150,000 feet timber, 4,000 palings, and 8 hogsheads ginger beer bottles.

“The Titus” News has been received that the steamer which ran into Flinders on Friday was the German collier Titus, bound from Newcastle to Melbourne, laden with coal.  When she ran in the sea was running unusually high.  She anchored about a mile off Cowes pier, but dropped her anchor too close to the land, not making sufficient allowance for the fall of the tide.  The result was that with the ebb tide she slightly grounded.  The efforts made to float her were unsuccessful, and she now lies aground half way between Cowes and the Flagstaff Hill, her stern is afloat, but amidships the vessel is resting on a sandbank.  The only people now aboard her are the Captain’s wife and her child, and a crew of 22 men.  The Captain came on to Melbourne to arrange for assistance from a steamer and to obtain lighters.  At present the Titus is not making any water, but it is feared that unless she is quickly lightered there is danger of her being strained.  Her crew by latest accounts were removing the cargo from amidships to endeavour to float her off.

1891: Under command of Captain O. J. Broomhead. Work commenced on granite quarry at Cape Wollamai to supply stone for the Equitable Life Assurance building.  A stone jetty was built and heavy cranes were set up.

1892-93: 49 shiploads taken away in first contract in seven different ketches and schooners, a total of 2000 tons.

The Kermandie under new master Andrew Hendrikson left Cape Woolamai on 9th December with a load of granite in the hold and one large piece on the deck.She also picked up wool at San Remo. The weather was bad and she called in at Rhyll for shelter.  The weather was still threatening and against advice from locals, the Kermandie left Rhyll for Melbourne on Saturday afternoon the 10th December and was never seen again.  It was feared she had foundered in the severe gale Saturday night.  It was suspected the granite cargo had shifted due to inadequate stowage, causing the vessel to capsize.

A similar occurrence happened to the ketch Gertrude in June 1891. She left Cape Woolamai loaded with granite and in Port Phillip a squall hit her and the granite shifted forcing her onto her beam ends.  She was beached at Swan Island and later refloated.

c.1888: Sold to Captain Lawrence Henderson of Queensferry and later of Bass Landing.

Jan 31 1906: Beached near Ventnor after rolling from heavy swell caused her to spring a leak.  She was unable to be got off.  Her cargo of timber from the mill at Bass Landing was sold.

“Wreck of the Speke” Feb 21,1906 : MELBOURNE, Feb. 23.- Particulars of the wreck of the ship Speke show that the disaster happened about 3.30 yesterday afternoon, when a fierce south-west gale was raging.  The scene of the wreck is near Kitty Miller’s Bay.  The coast is rocky, and most dangerous, but by miraculously good fortune all hands were saved excepting Frank Henderson, who was drowned when one of the ship’s boats smashed, against a rock.  The crew numbered twenty-six.  The vessel missed stays in the tempest, and despite every endeavour crashed on the rocks.  Two boats were put out, but both were smashed. The men managed to get a line to land, and the crew got ashore. The second mate readily followed a request by the captain that he should go over the side and carry a lifeline ashore.  He got on to land, and passed the line round the rocks, but none of the men would venture to pass along the line. Captain Tilston said it was necessary to hearten them, in view of the most imminent danger of all being drowned.  “I led the way,” he said, “and the remainder followed.  I wanted to be the last to leave the ship, but I felt it my duty to give the men a necessary lead.  When the vessel struck the seas dashed over her as high as the top-gallant mast.  If the men had tried to get ashore at night, we should have been in a dangerous plight indeed, and I am afraid would, have had a sad death roll.” 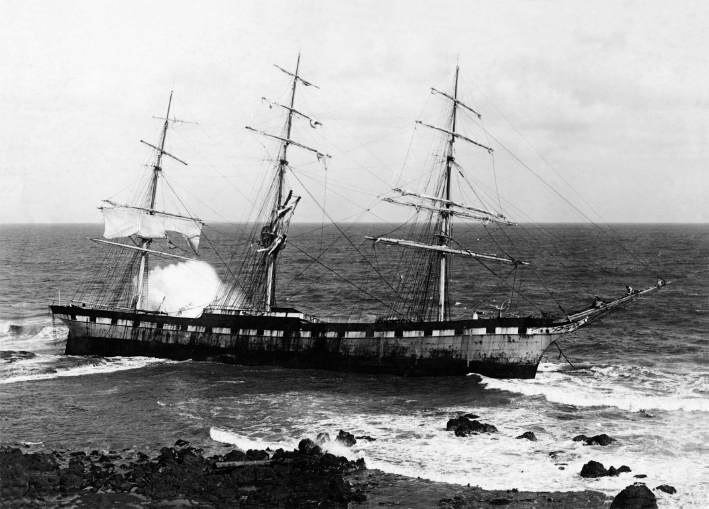 The Speke soon after stranding.

COWES, Tuesday.-Mr. W. Kennon, of Cowes, who purchased the wreck of the Speke, which went ashore at Kitty MilIer’s Bay two years ago, has been successful in recovering the cable and anchors.He has had to incur considerable expense.  A punt had to be constructed and conveyed from Cowes to the Back Beach, where it has lain for eighteen months waiting for favourable weather. The operation was attended with considerable risk, and could only be attempted with a smooth sea. About eleven tons of cable have been recovered, besides the anchor, which weighs two tons.

The majority of Victoria’s shipwrecks are protected by a 75-year rolling date or by individual declaration.

Heritage Victoria is the agency to contact for any permits for access to protected zones or proposed investigation or disturbance of shipwreck remains.

Following John’s talk, Bill Jeffery from Flinders University gave a short talk on the camp being held on Phillip Island for the maritime archaeology students and invited members of the society and public to join them in the evenings for their lecture series at Anchorage Caravan Park, Ventnor.

Vote of thanks: Christine Grayden gave the vote of thanks saying that we were all in awe of John’s amazing fund of information on the island’s maritime history and his ability to research the most puzzling historical problems. He was no doubt an inspiration to the students in the audience. Audience agreed with acclamation.