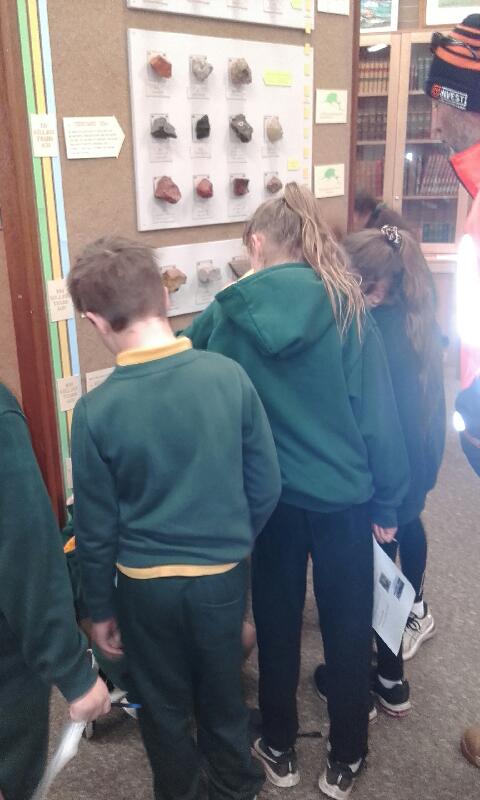 Students gathered around the Geology display discovering how old the oldest rocks of Phillip Island are: 440 million years!

Yesterday three groups of Cowes Primary School grades 3 and 4 children visited the museum for one and a quarter hours per group. During that time they sat on the floor in our gathering space (created last year in our revamp of the museum) and watched the History of Phillip Island DVD. They then had a talk from secretary (and former teacher) Christine Grayden, on Phillip Island before electricity and plastic. Christine used several items of the collection to stimulate discussion - a pair of World War One leggings; a pair of 1910 men's boots; 2 school slates; a 1906 silver, hog's bristle and bone toothbrush which was compared with a modern plastic tooth brush; an old hand mincing machine which some of the children were chosen by their teachers to use to turn dried bread into bread crumbs while the others watched. Christine took the machine apart to show the children how it operated, which fascinated them. She asked them what modern machines we used to replace the old mincer. Some children said blenders and one girl said Thermomix! (even young school children can surprise you). The children then used their museum detective sheets to search for certain objects and photos within the museum display, writing down their answers on their sheets to talk about when they got back to class. It was a most successful morning. Thanks to Cheryl, Graeme, Jeff and Bruce who helped with the children's questions. Next Wednesday another four groups of the Cowes Primary School grade 3 and 4s will come through. Cowes Primary School now has an enrolment of over 600 children. The National Curriculum has local history as a grade 3/4 activity, so we usually see a new batch of CPS children every two years.