What a brilliant success the historical and genealogical societies' 1868 land ballot re-enactment was yesterday, Saturday November 10, 2018! Over 250 people attended from the island and Melbourne, with many original ballot settlers' family members making a reunion out of the day and having a wonderful, social time before and after the re-enactment. John Jansson from the historical society had put up a brilliant display, and Jan Andrews from the genealogical society had done a huge amount of research on the first ballot settlers and had many folders of their genealogy and a most interesting map showing many of the first Crown Allotments to be taken up. These were set up along one wall and the back of the hall, and attracted a huge amount of attention.

Our secretary, Christine Grayden, had written the script, which included excerpts from an article that appeared in the Argus newspaper the day after the original ballot. The four main characters were: Pamela Rothfield (a Cleeland/McFee descendant) as the narrator; Ashley Reed as the journalist; Mike Cleeland (family member of the original Cleeland settler) as Assistant Land Commissioner Hodgkinson; Peter Lawrence as his assistant. We also had descendants or family members playing the roles of original ballot selectors George Cox, Joseph Richardson, John B Lock, David Burton, John West, Charles Grayden and Robert Commodore Miller. Jill Grayden and Rachael Ferguson played the roles of the unidentified women who were successful in the first ballot, and we also had another two selectors and two people objecting to them. Our MC for the occasion was the society's president, Graeme Clauscen.

The performance has been videod by Paul Cooper of Pre-Travel Video, firstly to select sections for an overall video on the events that have occurred for the 150th celebrations throughout the year. However, the society is keen to get a grant to enable us to have Paul edit a complete version of the performance for us. Thanks to everyone who was involved throughout the year in preparations, and on the day. Special thanks to the team in the kitchen: Anne, Judy, Anne, Lyn, Susan, and Julie who helped with all the shopping for the food.

Photos by David Maunders show Pamela Rothfield (narrator) and Graeme Clauscen (president) beside a section of John Janssons's display, and Christine Grayden frocked up for the occasion! 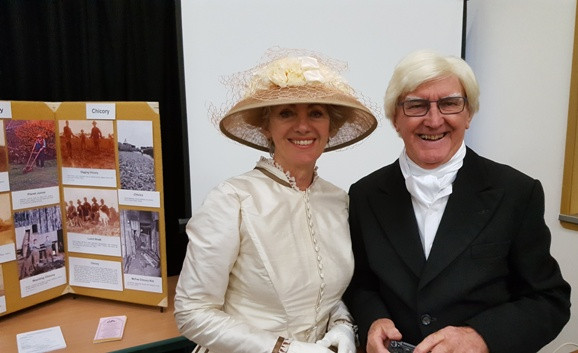 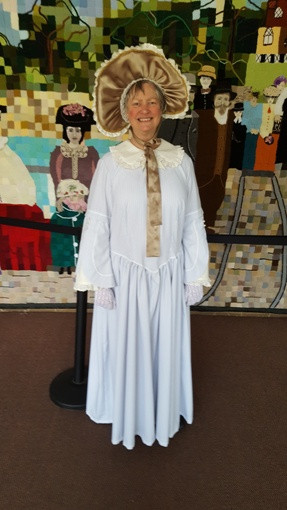