Model boat on loan to the museum

Bass resident Garry Walton has loaned a model boat made by his father Ted Walton to the museum, to partner the existing donated model boat we already have from Ted. Unlike the first boat, which is a couta boat, this boat is a netting boat with a shallower draft. Ted called the model "Tory", perhaps for his mother who was Victoria, but the boat is modelled on Ted's own boat, the "Shirley". The model is made of cypress and Oregon and, like the other model, includes panelled sails sewn by Garry's mother, Pat. The two boats look very impressive together in the museum, and we thank Garry for the loan of the second model. Photo shows Garry with the model, before the sails were hoisted onto the rigging. Ted spared no detail with his 1/4 scale model, even down to the fish box, stamped Miriklis for Jack Miriklis, fish market auctioneer whom Ted dealt with. 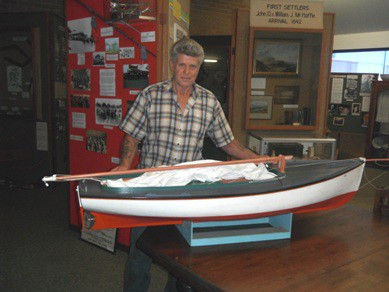