Christine Grayden gave a reading at the society's October, 2015 General Meeting, of the memoirs of the late Keith Grayden concerning his primary school days at Ventnor State School, 1920s and 1930s. The talk was illustrated with a Power Point show of various photos from the era. Visitors Sally and Mike Syme now own the Ventnor State School. The full text of the memoirs are on our website: pidhs.org.au, go to Essays and Talks.

Ventnor State School started in the Ventnor Hall. Attendees included Ken McKindlay, who lived with Harris’s. The school teachers boarded with them. One morning the teacher went ahead of Ken but when he came along he found her hooked up in the barbed wire fence, so he had to unhook her clothes for her!

Keith went to Ventnor school from 1925-1934 in the school building on the corner of Ventnor Beach and Ventnor (then Nobbies) Rd, on land donated by Tom Jones. He started in a class of 32 which didn’t alter much, though some were itinerants, their parents being chicory workers. They all cobbered up together. His siblings Doris and Don went there too. 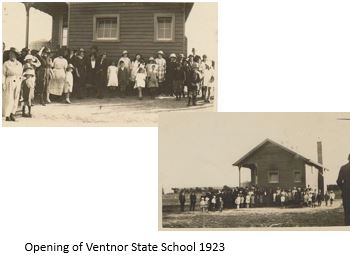 Keith’s first teacher was Ronnie Martin, as “mad as a snake”, “quite mental”, and a bully. He gave Doris the strap, including around her neck, and made her crook. He kept boxing gloves and used to get the older boys to fight it out if they had major disagreements. Those boys were all a bit wild.

After Martin, Keith had all female teachers. Jessie Wilkinson, Alice Guy, a Collins (?); they were often younger women. A Mrs Harrrison brought her son and both boarded at Harris’s. Every day for lunch he had two pieces of toast his Mum got ready for him. None of the teachers stayed long.

Miss Stephens came along but she only stayed one day and “bolted”. It was six weeks off until another teacher arrived.

Miss Clarke, about 40 something, replaced her. She was a disciplinarian, and her job was to straighten out unruly schools. Keith’s Aunty Margeurite was teaching the juniors ½ days as well.

Keith’s last teacher was Alan Anderson, but Keith left after 6 months with him. Alan’s mother drowned in front of him and he couldn’t help her so he learnt to swim and became a Life Saver. He taught the kids to swim down at Ventnor Beach, and they ended up being able to swim fully clothed, boots and all. One day on the beach he was in his bathers demonstrating breast stroke and as Keith described it, “his old fella snaked out of his trunks”! It was great entertainment for the kids.

One day Miss Clarke had the class down at Ventnor Beach. They used to go into a patch of scrub to get changed. After swimming they were dawdling too much for her. “She rushed in wearing her neck-to-knee singlet bloomers flourishing a big green tea tree stick and connecting with it too!”  Reece Jones was going to report her for “being immoral” but didn’t get far.

Before Anderson they had Marj Brown who became Marj Mallory. She came from Teddywaddie (sp?). She was fairly strict but the kids got on OK with her. She had a habit of rapping her knuckles onto misbehaving kids’ heads and loudly proclaiming: “Noodle, noodle, noodle!” At lunch time on the first day Snow Dixon (who’d already been a victim) said: “She’s looking for a fight, that woman.”

She caught the boys pelting blue metal stones from the road at the new school sign. The Nobbies Rd was then made of 2 inch blue metal. The boys were trying to bombard the “O” in the sign. Marj was going with Bill Mallory at the time. He came along on his tractor and was so engrossed watching Marj doing a good job disciplining the boys that he drove straight into the notice and flattened it. “A little bit embarrassing for them, and great entertainment for us!”

One lunch time they were playing “Robbers and Police”. Keith’s cousin Stan was playing the role of a “murderer” captured by the Police. They gave him a trial and condemned him to be hanged. The boys put a rope around his neck and tied it to a cross-piece in the shelter shed. Stan swung himself around a bit. He got himself out of it but he developed quite a sore neck after it. “His mother wasn’t very happy and that game was blacklisted until the next teacher came along and didn’t know anything about it.”

Kids used to draw a straw to see who would test the new teacher to see if they would scare. Keith drew the short straw for Miss Clarke so went up behind her and roared at her at lunch time. But she was “less scared than she was fleet of foot” and she swung around and grabbed him. He had to sign the dreaded Black Book and when Aunty Marguerite arrived in the afternoon to teach she found her nephew Keith sitting in the corner with a hang dog look.

The so called Black Book was a special book where for any serious misdemeanor the kids had to write their own names in it. Inspector Parker came one year and was checking through it and muttering: “Impossible! Impossible! No boys can be this bad.” Keith got in it twice, but the second time he was innocent. The girls complained to the teacher that the boys were getting around the back of the girls’ toilet and when they sat down the boys were lifting the can flap and poking the girls’ bottoms with sticks. Keith was implicated, but he and Phil Grayden were actually doing something else although “we saw the others on their mission”.

Walking home after school Keith and his older sister Doris used to call in at Harris’s to get a bun, then dawdle down to Bert and Myrtle’s to get a bun or scone there as well. They never hurried home.

Poetry reciting was a big thing in those days. One week Keith had to learn and recite “Clancy of the Overflow” in front of the class but went all “sing-song” in the process. The teacher started beating time and the kids chimed in, some reciting as well, others beating time. Keith was very embarrassed.

All the children learned “Men of Harlech”. The Significance of that was that Tom Jones, who had donated the land, and was affectionately known as “Plumb” was an ardent Welshman. When the children sang it Plumb would march up and down his next door driveway whistling along. “He was a magnificent whistler. You could hear him all over Ventnor.”

The school kids sang with the Ministers, especially the Presbyterian Minister, Mr Raff. Keith remembered that Mr Raff  was a “very animated sort of chap, and got us all wound up.” We all recited the 23rd Psalm and all lifted the roof off when we got to “we shall live in the house of the Lord forever”! Keith’s family later moved to Cowes and the children attended Cowes State.School. Mr Raff taught singing there, too, but the Cowes kids were much more reticent. He said: “I get twice as much noise out of half as many children at Ventnor!”

The Ventnor School had annual concerts in the Ventnor hall, where there was always a good turn-out because there no opposition – everyone was looking for good night out. They had recitations, skits – some better than others! – quartets and group singing. 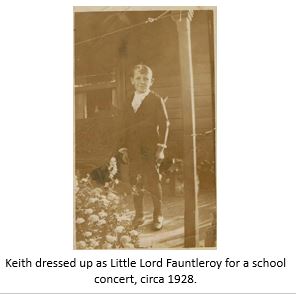 One concert they did “The House That Jack Built”. They had lots of cardboard for the house but it fell down before they finished! Valda Grayden was the maid and her brother Phil was the man all tattered and torn that kissed the maid. But instead of the kiss they had a “box-on” on stage and that was the highlight of the concert.

On one concert occasion they were all instructed to bring a corner-cut kerosene tin that the organizers lined up on the stage and put candles in. This was very effective lighting. Sometimes they did shadow plays where they hung a sheet up and the kids were the puppets. They always had a “Gloria” light, like a gas light that had to be pumped up. A bank of these was used in the hall for lighting.

Regarding the conditions in the school, there was no lighting at all in the school apart from natural lighting. They had a fire place for cold weather. One day Keith was detailed to take the ash from the fire place. He didn’t realize there were embers still alight. He put the ashes in a box and took them, as usual, to the shelter shed and put the box on the floor. The gang was all going to the beach, so Keith just “shoved it in and bolted”. While they were away the box caught alight, then the wooden floor. Fortunately there were enough people in the district who saw the smoke and put the fire out before the whole shed burnt down.

Older kids sometimes acted as monitors – e.g. the 6th, 7th and 8th graders used to take juniors for reading, maths, etc. They cleaned the board. Raymond Grayden and Reece Jones had the job of emptying the toilet pans. They found out that there was an allowance payable that they hadn’t been getting, so they went on strike. They lined all the likely replacements up and threatened them if they took on the job. Eventually they won and got their allowance.

Keith was never very sporty, but mostly at the school they played cricket and football. The Jones kids and Snow Dixon were all very good at both cricket and football. They had a cricket pitch in the school ground, which was pretty barren, though the block had sugar gums around the perimeter and a good thick Prickly Moses hedge along the bottom fence. One cricket team only had 10 players so they put Valda Grayden in and she topped the bowling. The local paper headline read: “Girl shows Boys How to Play Cricket”. Generally the Ventnor kids were “pretty good” at sport.

The fence around the school ground was post and rail and the boys would all try and walk clean around the perimeter. Soon after the school building was opened Skip West fell off and his back was severely injured. He carried the injury til he was killed in a motorcycle accident at Drouin many years later.

The “School Paper” came from the Education Department each month. Each student had a special folder with twelve strings to put each edition into. The teacher used to teach a bit from the Papers, especially the song on the back page, such as “The Ash Grove” and “Derry Vale”. They had no musical instruments whatsoever. When they reached fifth grade they got a “Fifth Reader” at the start of the year to work their way through. Keith doesn’t remember much in the way of story books being available at school. At home he read “Peter the Whaler” and “Robinson Crusoe”. 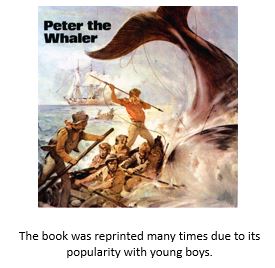 There were always books at home. He had to do a timed test on “Books I have read”. He used Peter the Whaler, but spent so much time on the preamble that he ran out of time to write about the plot, so finished up with “Peter had many exciting adventures”. The teacher wasn’t very impressed! 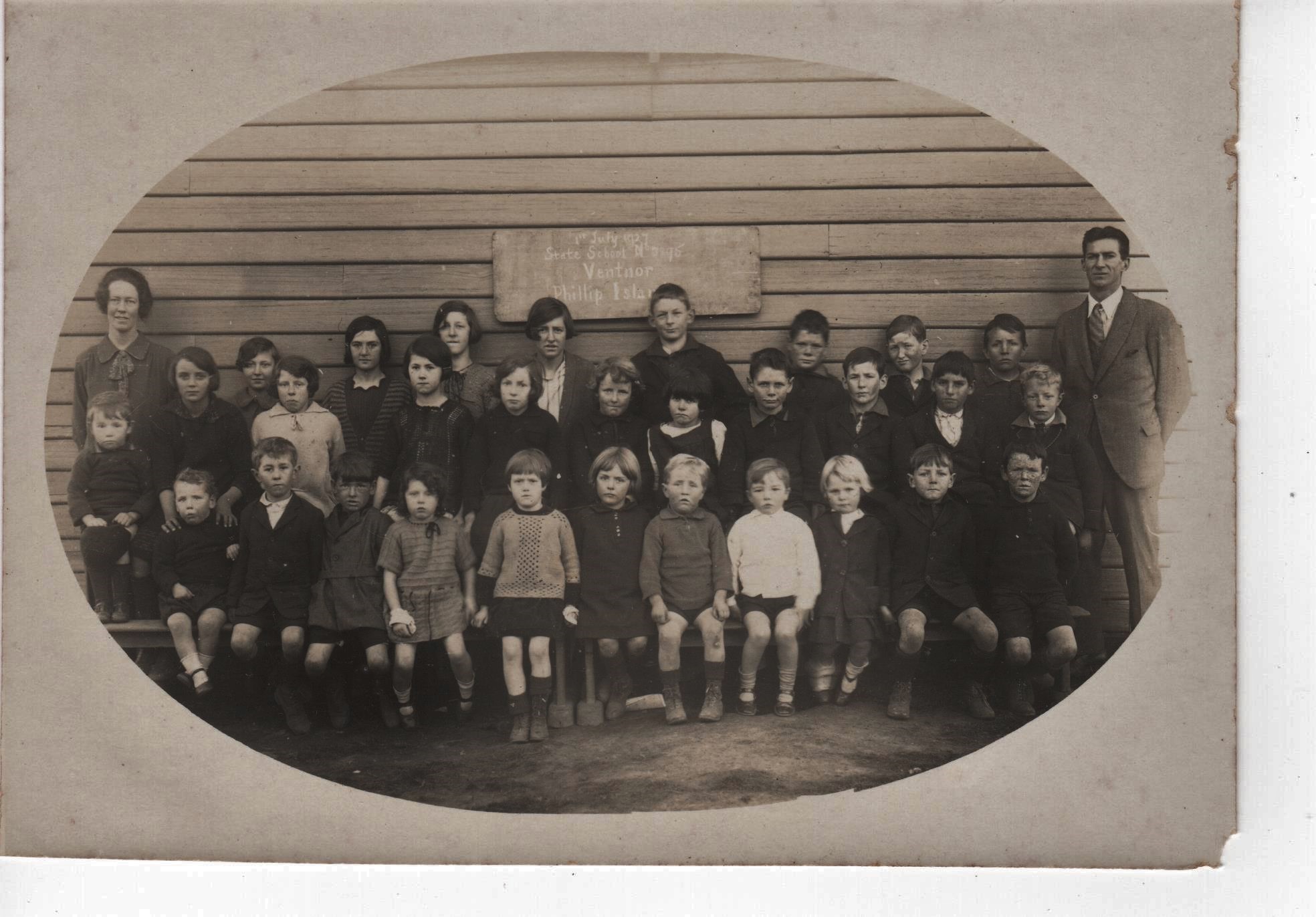