Phillip Islanders volunteer to save bears

Deb Youle spoke to the society's General Meeting on 10th June, 2015,  about the organisation “Free the Bears”, and of her and her daughter Ashleigh’s time spent in Cambodia volunteering at a centre for rescued Sun and Moon bears.

Deb was proudly wearing her Volunteer shirt from their two weeks spent at the centre. She and Ashleigh, who is a veterinary nurse, went together as they both love animals and wanted to go to an overseas country and volunteer to help animals. They chose Cambodia because it is little known.

“Free the Bears” was started in 1998 by Lady Mary Hutton, whose organisation has been responsible for the rescue of over 600 bears in various Asian countries. These bears are locked in cages in bile duct farms for the Chinese medicine trade. Lady Mary was a “normal, everyday housewife” who presented thousands of signatures to parliament in support of bear rescue. Sun Bears are used as food in restaurants while Asiatic Moon Black Bears are used for the bile duct industry, though this doesn’t happen in Cambodia where they are mainly used for meat and trade.

These bears are often snared in the wild, sometimes losing a paw as a result; their babies are taken and sold on the black market. Cambodia has a horrible history and the people are in desperate circumstances, so wildlife doesn’t have much chance. Pnom Tamao is a big tract of jungle government owned, but there are few resources to devote to it. At Pnom Tamao there is a rescue centre with thousands of animals. Free the Bears is part of that centre.

Deb and Ashleigh paid to volunteer - $1,000 each for 2 weeks, which included accommodation at the “Volunteers’ House” and morning and evening meals. Lunch was taken at the centre for $1 a day.

There was no air conditioning and it was very hot. Mosquito nets were provided over the beds. No toilet paper was allowed into the toilet system. There were bars on the windows of the vol house due to the high crime rate. A security guard patrolled the grounds from 6 p.m. until 6 a.m. All the food was vegetarian.

Khmer ladies do not expose their shoulders, cleavage or knees, so out of respect the female volunteers dressed accordingly. The country is very hot and dusty, but the Vol house had a pool for cooling off and cleaning off the dust. It is necessary to drink bottled water as the local water is dangerous. There is little running water, and they only had four showers for the fortnight. Volunteers are asked to bring needed items, so Deb took four pairs of steel toe boots for the centre’s workers, perfumes as sensory stimulation for the bears, and books for children. They also ask for rakes, but Deb was unable to transport these.

Deb showed many photos. One showed truck loads of workers on their way to the poorly paid garment factories, where conditions are appalling. Another showed a rough platform with an iron roof, which was home to 2-3 Cambodians.

The Sun Bears are about 1m tall when they stand up. They are very rambunctious, and basically vegetarian though they will eat bugs and termites and are given a raw bone to chew on once a month. Many were torn from their mothers, so suck each others’ ears and paws for comfort. They are each given a dog biscuit ball every day, which the volunteers filled with treats for the bears including diced fruit, vegemite, honey, jam and vines. The Sun Bears have very long tongues – 12” long – and after removing the vines they lie on their backs and spend ages getting all the treats out. The balls are very tough and made in Australia. 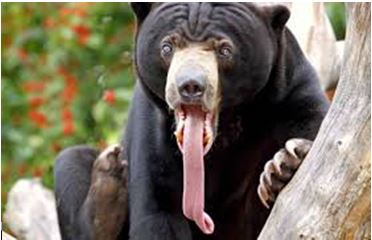 The bears have special hammocks made from seat belt webbing both inside and outside their dens. The hammocks have to be made from tough material as the bears have razor sharp claws, 5-6” long. They can’t be released as there is nowhere for them to go due to logging and the spread of farmland. There are 186 bears at the centre, in 8 houses with each house having 3 pens. Males and females are separated to prevent breeding.

The keepers train the bears with ‘clicker training’ – a clicker on a pole – where they click at a certain part of the bear and the bear will present that part for veterinary inspection. There is no hands-on contact with humans though, as the bears are essentially wild animals. Sometimes the Sun Bears do fight. Every bear has its own name and personality.

The Moon Bears are bigger with long hair and are not as energetic as the Sun Bears. They love bananas, vegemite, jam and honey. They also have a white chest marking, but different to the Sun Bears, and have a dark nose, where the Sun Bears have a white nose. The oldest bear is Brandy, a genetic mutation who is quite pale ginger, and is 22 years old. The bears are given fruit ice blocks once a week for a treat. While they don’t fight as much as the Sun Bears, there were two Moon Bears who had to alternate every two days between the day and night pens as they just didn’t get on together, and there was nowhere else to put them. 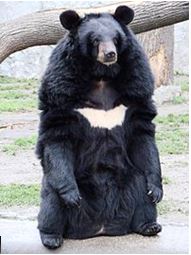 The volunteers go to the kitchen every day and help prepare the bears’ food. Breakfast is a big meal for the bears. On different days, different houses get different treats. They are given fresh fruit and vegetables every day. It has to be cut up very small and mixed with rice, water, eggs and lentils.

The centre is a long way from services so is self-sustaining. Gas is made from bear poo, of which there is plenty as both the day and night pens are cleaned and the poo picked up every day. The volunteers help with this. The centre has its own water storage, and solar power is stored in batteries. Cooking is done on gas stoves. All food is weighed and based on a technical formula.

While there, Ashleigh spent two days weaving a bear hammock, and was able to put her name, a picture of a bear face, and the date on the hammock.