The Bunurong/Boonwurrung Aboriginals visited Western Port’s islands during the summer months and feasted on fish, shellfish, short tailed shearwaters (mutton birds) and various marsupials. There are numerous middens in Western Port. The Bunurong/Boonwurrung clan to occupy Phillip Island was the Yallock Bullock. More information can be found about them in the museum’s display. There is a shell bed at Churchill Island but no archaeological investigation has been done there, so we don’t know if it is a midden or a naturally occurring shell bed. It is believed that the Bunurong/Boonwurrung people occupied the area for some 20,000 years at least.

The first Europeans to be resident full-time on Churchill Island were the Pickersgills – Samuel and Winifred. Winifred (Nealis) was an Irish famine orphan, at a time when the choice was emigrate or die in Ireland of starvation. She emigrated to Australia where she did domestic work before marrying Samuel. Recently Pickersgill family historians have found a record of Samuel being transported to Van Diemen’s Land as a convict. After five years he escaped and after another few years was given up as dead by the government. In between times he changed his name several times, presumably to evade escape. He and Marion lived on Churchill Island from 1860-66 but never owned it. The family story has it that Marion worked hard to raise sufficient funds to buy CI but Samuel lost it in a card game. The more likely story is that he did not wish to contest John Rogers for the purchase of CI as it would have drawn attention of the law to Samuel. Winifred had three children while living on CI, including giving birth to one without any adult help at all.

Winifred and Samuel had both come from desperate, impoverished backgrounds, and were obviously determined that their children would not have similar travails. All of their nine children survived to be solid, honest citizens. We do not know where their domicile was on CI. They moved from there to San Remo, having farm land and a boarding house.

John and Sarah Rogers apparently lived simultaneously with the Pickersgills on CI for a few years. John purchased CI for £210 in 1866, and lived there until 1872 when they moved to Muddy Creek near Warragul to establish model farms. While on CI, John grew many tons of potatoes and wheat which he sold locally and even in Melbourne. Cultivation of the islands was illegal at this time, but John Rogers did it anyway!

John Rogers married Sarah Jane Orr in May 1862 when he was 46 years old and she was 28 years old. Two of their three children, John Churchill Rogers and Charles Henry Baker Rogers, were born on Churchill Island. John and Sarah worked hard to create a good life for themselves on the island. They built cottages and planted flowerbeds, which Sarah laid out with paths surfaced using local shellgrit. The garden paths are still surfaced with shellgrit to this day. John and Sarah also developed an orchard, vegetable gardens and row of trees as wind-breaks. The two cottages built by the Rogers are still standing and remain some of the oldest buildings in the area today. Eventually Rogers had to mortgage the island to John McHaffie who sold it in 1872 to the famous Samuel Amess.

Samuel Amess (1826-1898) was the first of three Samuel Amesses to own CI, and certainly the most famous. He was a stonemason/builder who had many grand buildings, railways stations and bridges to his name. He was mayor of Melbourne when the Town Hall opened to great fanfare in 1870. Samuel did not want the councillors to get into an undignified spat over the costs, so paid for everything himself – a fancy dress ball for 2000 people and a cantata attended by 3000 people!

Samuel was a member of the Victorian Acclimatisation Society and imported many foreign animals to CI, including hares, rabbits, pheasants and skylarks. He also imported Clumber spaniels from England, especially bred to flush out pheasants. From Scotland he imported Highland Cattle. Early on he built the solid homestead still there today, lining the walls with insulating gravel, covered with boards, hessian and fancy wallpaper and ceiling paper. Samples of the original wallpaper were found during restoration in 2000, and were reproduced and used in all of the rooms.

Money was no object to Samuel. Apart from being an Alderman, he was on many boards and committees including markets, public works, health, Hackney Carriage, Melbourne Tramways Trust, Melbourne & Metropolitan Board of Works and the Melbourne Harbour Trust. He was also a devout and active Presbyterian. We can only imagine with this schedule how his wife Jane coped with the many social and civic functions they would have hosted &/or attended.

Although Alderman Samuel passed CI over to his son Samuel within ten years, he continued to be “Lord of the Manor”, hosting business and civic acquaintances for week-long sojourns spent hunting pheasants, rabbits and hares, playing billiards and also enjoying the company of his family and eventually grandchildren. The third Samuel to own CI fell on rough times, was delisted as a barrister and solicitor and declared bankrupt. He sold CI to another man famous in his time, Gerald Buckley.

Gerald Buckley, son of the founder of Buckley and Nunn drapery store, Mars Buckley, purchased Churchill Island in 1929 and employed brothers Bob and Ted Jeffery to run the island as a dairy farm.  Known as a kindly man and philanthropist, Gerald was interested in the Big Brother movement which assisted young English migrants to settle in Australia. Buckley helped Bob to bring out his brother Ted.

Gerald Buckley grew up in wealthy circumstances, was well-educated and studied wool-growing with successful results on his Western District properties, which included ‘Narrapumelap’, one of the state’s leading Merino stations.

A thickset man with a passion for sport, especially boxing and horse-riding, Buckley never married. He went on to gain a wide reputation as a progressive pastoralist, horse breeder, expert rifleman and big-game hunter.

Bob and Ted Jeffery worked tirelessly to improve the property. They dug a large dam and built a dairy, and, in the early 1930s, won the Phillip Island Council’s ‘Better Farming’ competition. 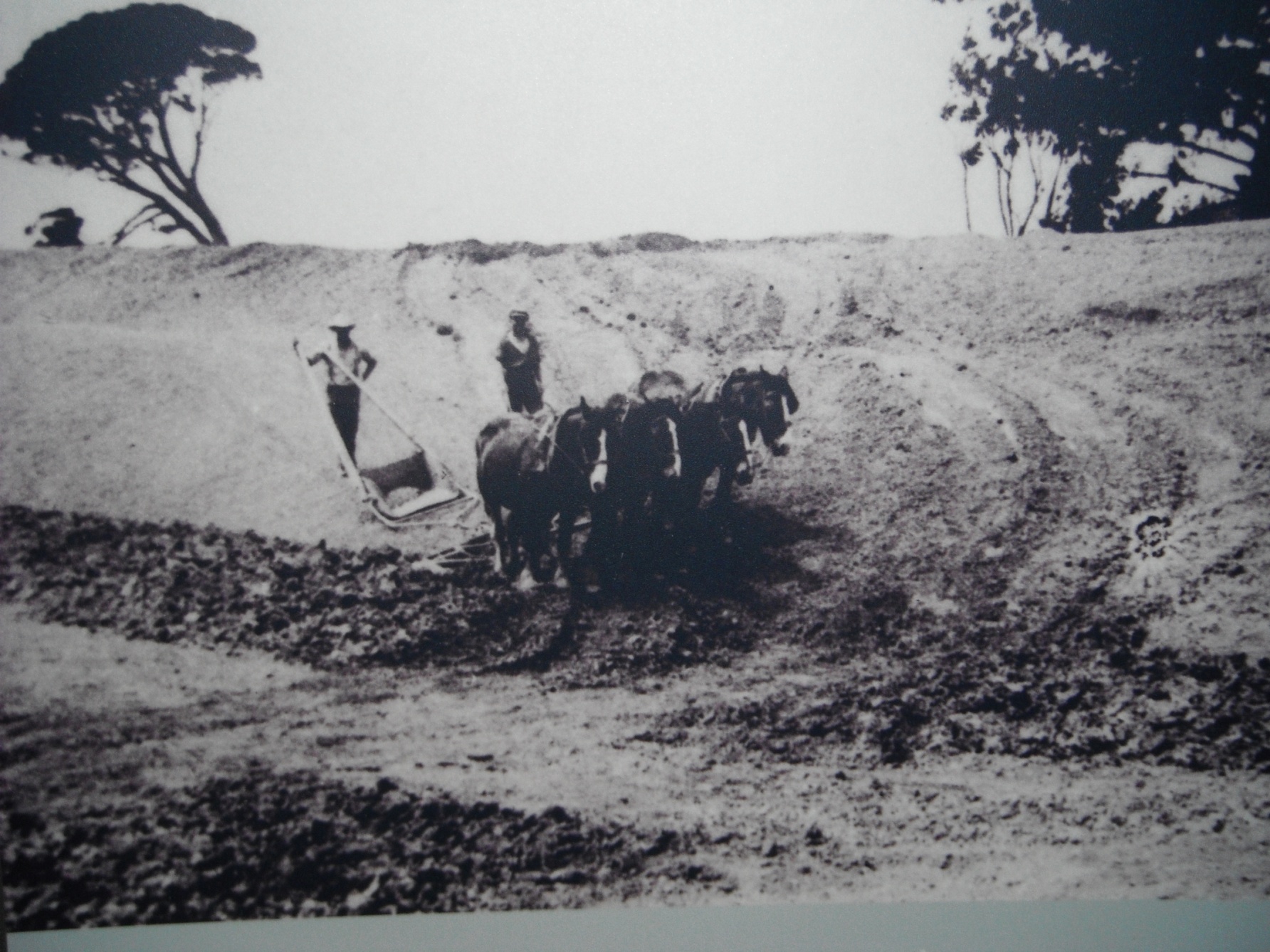 As the farm prospered, Bob and Ted Jeffery’s skills earned the respect of Gerald Buckley and their friendship grew. During a visit in 1935, Buckley revealed that he planned to leave the island to the brothers. In a twist of fate, Buckley died that year before changing his will. Churchill Island was left to his English relatives who sifted through the contents and sold the island to Dr Harry Jenkins in 1936.

During the war years, Churchill Island became a haven for Melbourne dentist Dr Harry Jenkins and his family. Dr Jenkins bought the island to assist his wheelchair-bound son’s rehabilitation. Ted had been paralysed from the waist down in a diving accident when he was sixteen. Ted’s nurse Sister Margaret Campbell, or ‘Aunty Jimmy’ as she was affectionately known, welcomed a constant stream of visitors. The kettle was always on the boil and there was no end of delicious country food and warm hospitality.

Dr Harry Jenkins had led a colourful life as an adventurer, soldier, pilot, champion car and motor bike racer, big game hunter and successful Collins Street dentist. The Jenkins era was generally filled with fun and adventure. Visitors remember flounder spearing, swimming in the dam and firing the cannon each New Year’s Eve. There was also plenty of hard work – milking the cows, rowing the cream to Phillip Island, tending the vegetable garden and maintaining the machinery. Churchill Island was a Dairy Shorthorn farm from 1936-1945, when Jenkins converted to beef cattle. 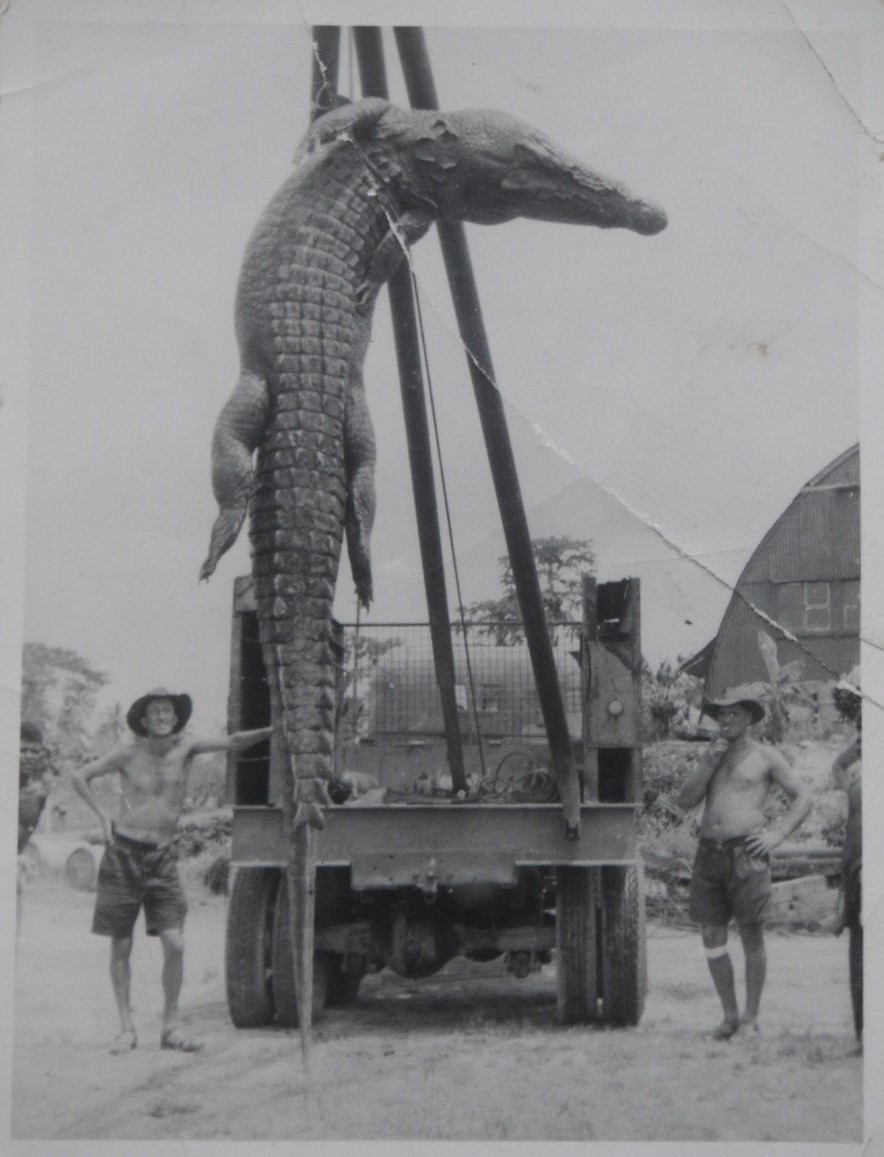 Harry Jenkins at left with a crocodile he shot.

One of Ted’s main interests was ham (amateur) radio. On Churchill Island an antenna was constructed and a room in the house set aside as his station. His call sign was VK3qk.

Before the first bridge was built, getting to Churchill Island was an adventure. Stock was herded across at low tide and goods were floated or rowed over at high tide. As the need for a bridge increased, timber from an old pier at Port Melbourne became available and plans were drawn up.

Work began in 1957, but disaster struck when the contractor’s tractor slipped off the bridge and he was drowned. All work stopped. Eventually Ports and Harbours completed the bridge in 1959.

Ted Jenkins died in 1960, leaving Sister Margaret Campbell shattered. When Harry Jenkins died three years later, she grieved again, but he left her Churchill Island in his will, so she was able to stay on the island she loved until poor health forced her to auction the island in 1973, and move away to live with family until she died in 1979.

Margaret Campbell was born in 1907 in Ballarat. While nursing she cared for Ted Jenkins when he was in hospital following his accident. A close bond developed between them, and Harry Jenkins asked Sister Campbell to become Ted’s private nurse.

Sister Campbell loved Churchill Island and helped built it into a thriving dairy, then beef farm, despite suffering from Paget’s disease and spending many years lifting Ted, both of which left her chronically bent over. Despite her condition, she was an avid gardener, growing orchids and gloxinias in her greenhouse, and tending the garden after its restoration by nurseryman Peter Rawlins, who also built the original sundial. Many of Sister Campbell’s plants are still to be found in the garden today.

‘Jimmy’ eventually auctioned CI, which was bought by Patra Orange Juice co-founder, Alex Classou as a place to spell his race horses. Mr Classou received a phone call from the Victorian Conservation Trusts Sir John Knott one day, inviting him to tea at the Windsor Hotel. There Sir John convinced Classou to sell CI to the government.

With the building of a cabin-style house away from the historic precinct, the manager Carroll Schulz and his wife Amy came to live there. Various employees and managers have lived there since, ensuring a permanent presence on the island for security at all times.