A journey to Phillip Island, 1860s

Christine Grayden gave an illustrated talk to the society's February 2015 General Meeting, on a trip from Melbourne to Phillip Island made by a Ray Tovell in 1869. Christine read out Ray’s account of the trip, and illustrated it with a Power Point showing scenes from that time of places and people along the way.

Ray Tovell had accepted an invitation from William Harbison, a timber merchant of Bay Street Brighton, and a Councillor in the same municipality of long standing, to spend his Christmas holidays at Phillip Island, much of which was owned by Harbison. The island at that time was practically uninhabited and Tovell, feeling that his holiday under these circumstances would be an exciting one, duly set off for the “Bull and Mouth” to join the conveyance that would carry him for the greater part of the journey.

I have not been able to trace any original of Tovell’s manuscript, nor work out when he wrote these memoirs, but I guess at about 1900, given that he was a young man when he made the journey, and he speaks of the amount of development that had gone on since then.

At the “Bull and Mouth”, Tovell was introduced to “Old Bill”, also known as “Warrigal Bill”. 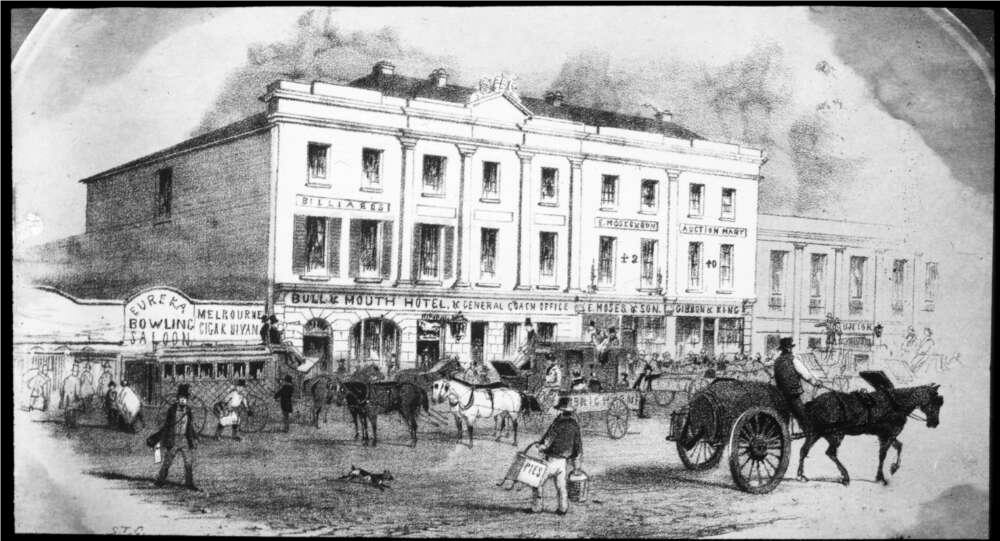 Tovell takes up the story:

“As we left the “Bull and Mouth” the coach was speeding on its way towards Hastings, with the horses appearing just as anxious to move as the driver. The journey had already been delayed by an over-indulgent passenger (a well-known popular sportsman of past years). Bill’s patience finally became exhausted and in a voice of harsh words representing “all aboard!” and to the cracking of whips amid which was the call of the ostler to “drag the cow aboard Jack and put him in the boot, or, by cripes, I’ll go without him.” The attendant knew Bill meant what he said and the command was quickly executed. Thus with a further crack of the whip accompanied by an “all clear” from Jack, the leaders started off on hind legs and the journey had begun.”

“Some short delay occurred at Prince’s Bridge, owing to the fact that its roadway was too narrow to permit our passage and the traffic was against us. “Bad luck,” said Bill, as he cleaned the flies off the restless leader’s ears with his whip without touching the ears. For Bill was the expert driver of that time, south of the Yarra. “That cursed tollkeeper will be our next stop I suppose, and that near side ‘un is pretty green and gets dirty with ‘er ‘ind legs at times,” grunted Bill”

“Two bob dropped to the ground of the tollkeeper opposite the Grammar School and saved delay, and although St Kilda Rd was only a single track, and rutty, we had at least begun to settle as we passed through the gate and started off for Mooney’s Hotel to water our horses, as an equally thirsty gent in the boot uttered protestations.”

“Bill refused to permit the thirsty gent to escape from his compartment confinement and at Dickens Street, Elwood; he was restricted to a flask of water from the East Brighton Creek, known as Elwood Swamp. This was an introduction to what we were to encounter further on along the journey.

“Plunging through mush and slush along the main road where offal, waste meat and drain from the old slaughter house harbor, with many unscriptural maledictions by Bill on his horses, we crossed a little creek, the only opposite one by the sea, and where four or five houses of Elwood stood before us, amongst them “Elwood House”, the old home of the late Hon J G Dogherty, some twenty acres or more surround it, and are now largely contributory to the little township.”

“Our journey to Brighton Beach was uneventful after we got the signal of “cease firing” and were permitted to cross at the Elwood butts, the Rifle Range of the early days; and although St Kilda Street was imperfectly constructed, we duly arrived safely, and I doubt to the satisfaction of our sweating and tired team, it being the end of their section of the journey, to be picked up again on the return trip. Foxalls Hotel (the Royal Terminus) was only a small one. The blacks were on one of their wandering trips from the Mordialloc Reserve and were fairly numerous.

“All aboard” and the next section to Mordialloc had begun. There were no houses practically, until Mordialloc was reached except for two inns. I observed some time ago a correspondent writing about the destruction of the ti-tree, but never was there any between Brighton and the Retreat Hotel; the ti-tree there was planted later. The track through the sand was negotiated by the skill of “Old Bill” in handling his team, and he cursed frequently – the overlapping boughs caused no little concern, and frequently snakes basking in the hot sand did not quite agree with the necessity of our horses holding the narrow track. The coastline now and then was different, but we kept fairly close to the sea.

“We stopped at the first turn-off to drink our thirsty horses from a spring on the cliff, of which there are two, and a cupful was equally accepted by ourselves. As we rested, Bill told us of a swamp close handy, and loading our muzzle guns, we waded through the bordering reeds. My hand swept back at a large tiger snake as we lay stretched between two divided tussocks; the separation haunts me still! We left the wild ducks alone, although in future times, I subsequently shot many a duck and snipe in the swamp, which is now covered with houses. The blacks gave great trouble and stole the horses, so Mr Ebden built a high stockade to lock the horses up at night. Balcombe Road is named after the late Mr Balcome who held quite a large area in this locality, which he sued for his stock travelling along the Mornington Peninsula.

“When we reached Beaumaris, it was necessary to turn eastwards as we had a passenger for Cheltenham and mail was aboard. Cheltenham Township consisted on one hotel and a blacksmith’s shop; the proverbial bank of New South Wales had not yet arrived. Our journey to Mordialloc was uneventful and as we passed Rennison Hotel, we were greeted with a waving of hats, as the arrival of the mail coach was quite eventful; the same excitement was caused when we arrived at Bloxidge’s (the Bridge Hotel), where we were timed to stay the night.

“We boys slept the sleep of youth all right, and took some stirring up at daybreak, and with a hot cup of coffee to awaken us we were on our way to Mark Young’s Hotel at Frankston for breakfast.  (Can I say it Just shows that waking up in the morning with coffee is nothing new!) 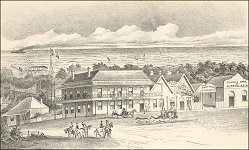 “In the time I am writing about, Carrum was a huge swamp, the backing up of the waters from the Dandenong Hills, and having no exit bar the Mordialloc Creek, which blocks the water, spread itself, and over an area bounded by Frankston and Mordialloc through what are called “Bangham Holes”, right to Dandenong Township, which was frequently subjected to submergences. This was the condition we had to face and in addition the back country had been ablaze and was still burning. A quarter of a mile took us into the swamp with one wheel in the water, and very doubtful at that, our driver having a job to keep the horses from leaving the track, within the swingle bars area, and cracked at the whip as he brushed aside overhanging ti-tree branches. Old Sol was just showing his blood red nose on the horizon.

“Bronze-winged pigeons, innumerably, flew in all directions; black ducks and swans, and all kinds of swamp birds left their resting places along the banks and flew to safety, while a number of native companions stood out in relief on a small island, dancing their quadrilles (a peculiar habit of this bird), silhouetted in the rays of the blood red rising Australia sun.

“As we neared the half-way house (later called Carlyons), a small inn, we found to our concern that water had found an opening to the sea and was pouring across the road, and as quick-sand generally accompanies this conditions, things looked only medium. Bill looked doubtful and got off his box then waded in to survey; he gazed at the expanse of water, then back at the coach and said: “We’ll risk it; let them have a blow first, they need it.” Meaning they needed a rest to stop panting.

“Our intemperate passenger in the meantime, like the swamp, seemed to have gone into liquidation and had refused to pay his fare. “My chance now,” said Bill. “Hey there George Washington – your fare! We don’t run this concern for nix; your fare or you goes into the bloomin swamp”.

He paid his fare.

“Bill then drove towards the running water and we got through all right, although the water did come into the coach. One of our leaders went down in the middle, and as this practicality took us out of the swamp proper, the rest of our journey with the exception of crossing Kananook Creek, was uneventful

“Soon the beaming face of a genial Mark Young and the prospects of breakfast made us cheerful, and once the morning meal had satisfied our severe appetites, we were in anticipation of the last section of our journey.

“From here to Hastings the road was good in comparison. Wallabies frequently crossed our path, and one big ‘old man’ kangaroo, evidently a stray from the hills, appeared. He waited until Bill cracked the whip, “No mail today,” shouted Bill, who then explained to us “He’s the postman who takes the mail to the fishermen; them fellows who they say deserted from a ship as come to Western Port Bay and landed at Settlement Pint”.

“At Hastings we took a little steamer for Phillip Island, where we were met by a bullock dray. “

So that is the end of Tovell’s adventurous journey to Phillip Island from Melbourne in 1869, but remember that after his holiday, he has to get back home again!