Beachside Cottage, San Remo and the characters who lived there

Current owner of Beachside Cottage, Miranda Sage, gave a talk to the society about its colourful history in April 2017.

Miranda Sage of San Remo gave a talk about her house “Beachside Cottage” and how its history relates to the history of San Remo.

Miranda also does the narrative of a video about the cottage, available on the We Love Sanny FB page.

Miranda and Albert Sage bought Beachside Cottage in 1996 from Ray and Judy Dickie, who were using it for holiday rental. The Sages turned it in to a B&B, adding bathrooms, and finding Baltic pine floors under the old carpet. They found old newspapers in the wall, including a fragment dated Saturday July 10, 1909. They realised the cottage must have a wonderful history and began researching.

The cottage had been owned by two dentists and dental technician – the latter, Betty Bindley, practicing illegally once her dentist father retired. The dental chair, spittoon and equipment for making dentures were still in the house when Miranda and Albert viewed it before purchasing, but not there now. Rob Maclellan told them that it was customary for families of women about to marry fishermen to pay for the woman’s teeth to be removed and a set of dentures made as a wedding present, as the fisherman would not be able to afford that expense in later life.

A spherical well was located in the garden and the fishermen and others who lived in the next door caravan park used to get their drinking water from it.

A dentist named Jack Thompson and his wife Nora bought the cottage in 1925 from the Bergin family. The cottage title was a small section of the Bergin property that went from the Back Beach  to the pub, most of that land was marshy and boggy. The cottage was built in 1909 and was built for one of Bergin’s daughters before she married.

Jack and his wife Nora, a grazier’s daughter, both contracted Spanish influenza in 1919, which left Jack with Parkinson-like symptoms and he could no longer practice dentistry. They therefore moved to live in their holiday cottage in San Remo. They had a two sons, John and Kenneth. Their son John was a successful ABC journalist, writer and poet. He had one son Peter, the film critic, and an adopted son Jack Thompson, the actor.

In 2009 Miranda and Albert were sitting having lunch when they saw an elderly man taking photos of the cottage. This turned out to be Bob Cochrane, who had come to the house as a little boy with his sister Betty (Mason) from the 1930s-1944. He had many stories about the Thompson family. Nora Thompson called the cottage “El Nido” – the nest.

For some time a group of artists, the Max Meldrum group, and those from Montsalvat, used to camp in the teatree beside the cottage. Miranda showed a photo of the cottage with a white tent in the teatree, which was the artists’ camp. She also showed a painting of the camp by Percy Leason. The artists stayed in the 1930s and 1940s and bathed naked in the sea, much to the horror of the Methodist camp nearby!

Betty Mason, as a child, once spent three months in the cottage with her mother . Betty had been ill and the doctor recommended that she be let ‘run wild’ for a year to restore her vigour. As part of her therapy at the cottage she remembers bathing in a big tin bath of warmed sea water.

Rob Maclellan remembers sitting outside Bergin’s store on a big granite grinding stone from the Bass mills and listening to Jack Thompson’s stories.

After corresponding for six years Miranda and Albert made a special trip to Sydney to see Betty in 2016. Betty had photos from the cottage from the 1920s – 1940s, which Miranda has now put in a special album. Betty remembered the golf course next to the Cottage with its red felt flags to mark the holes, and sand boxes for the tees. The photos include one of her brothers teeing off. The wandering cows used to eat the red flags. In one section of the course the balls would be hit over the edge of the cliff and the hole was on the beach.

Betty has written beautifully about her experiences. She spent a lot of time on the local beaches including Shelly Beach and collected many shells andeven “Aladdin’s Lamp” brachiopods. Betty has returned the shells to San Remo as a gift to Beachside Cottage.Miranda will take the collection to the Shell Museum at Inverloch for review to see if there are any varieties that are no longer found locally.Betty also remembers picnics at Bore Beach. Her father and grandfather used to shoot rabbits in the area. Miranda would like toput Betty’s writings into a small book.

Miranda wondered how Nora and Jack Thompson came to have their holidays in San Remo. Rob Maclellan told her how his grandmother used to hire a train to bring down young people from Melbourne Grammar schools for summer at their San Remo property. There they had a shed known as “The Rat House” to store all the necessary food such as bags of flour and sugar that had been sent down from Maclellan’s store in Melbourne. They burnt a fire in the fireplace 24 hours a day to keep ahead of the rubbish! The young people staying at the Maclellan’sproperty had responsibilities – the girls had to write long letters home to ensure there was enough mail going through the San Remo Post Office to keep it open, the boys were excused the long letter and allowed to write envelopes with a note. Jack Thompson’s father had taught at Melbourne Grammar so maybe that was the connection.

Betty recalls that during the war the Army camped among the tea tree at San Remo and left a terrible mess. They were patrolling the cliff tops.

The Cottage was sold in the 1940s to Bindley, a dentist who bought the cottage in his daughter’s name, Betty Bindley.  Miranda has been unable to find a copy of this title transfer as yet.Betty Bindley eventually married three times, including to Skipper Fleming, a local who only had one leg. The San Remo community was scandalised when Betty’s father developed dementia and instead of looking after him she placed him in care at the SleemanWing at the hospital in Wonthaggi. It certainly was frowned upon for spinster daughters not to devote their life to caring for aged parents.  Skipper had become Betty’s handyman before they married. They married after his wife died. Miranda said that someone once told her the cottage was referred to as “Skipper’s Cottage”. After Skipper died Betty married Mr Jenkins, an artist, then married Tom Cole who was mayor of Oakleigh. Betty Cole once came into the paint shop where Miranda’s sister Fran worked.

Julie Box commented that she had been taken to Bindley the dentist when she was small, and he had a large bulbous nose which was like looking at the ‘craters of the moon’. She also said that the Max Meldrum artists had an exhibition titled “Misty Moderns” of San Remo paintings. One of the artists wanted to set up a gallery and studio space at San Remo.

On purchasing the property Miranda took her mother, Vivian, to visit the cottage and garden.  Viv told Miranda that she felt the cottage garden had come under the influence of garden designer Edna Walling. Betty Mason was able to confirm this as she remembers her Aunt Nora saying that ‘Edna Walling says never have a straight path from the front gate to the front door’.

Miranda showed a remarkable map that Betty had drawn from memory of the layout of San Remo township of 70 years ago. Miranda also brought books with a connection to San Remo and the cottage, photo albums and a photo board for the members to look over. 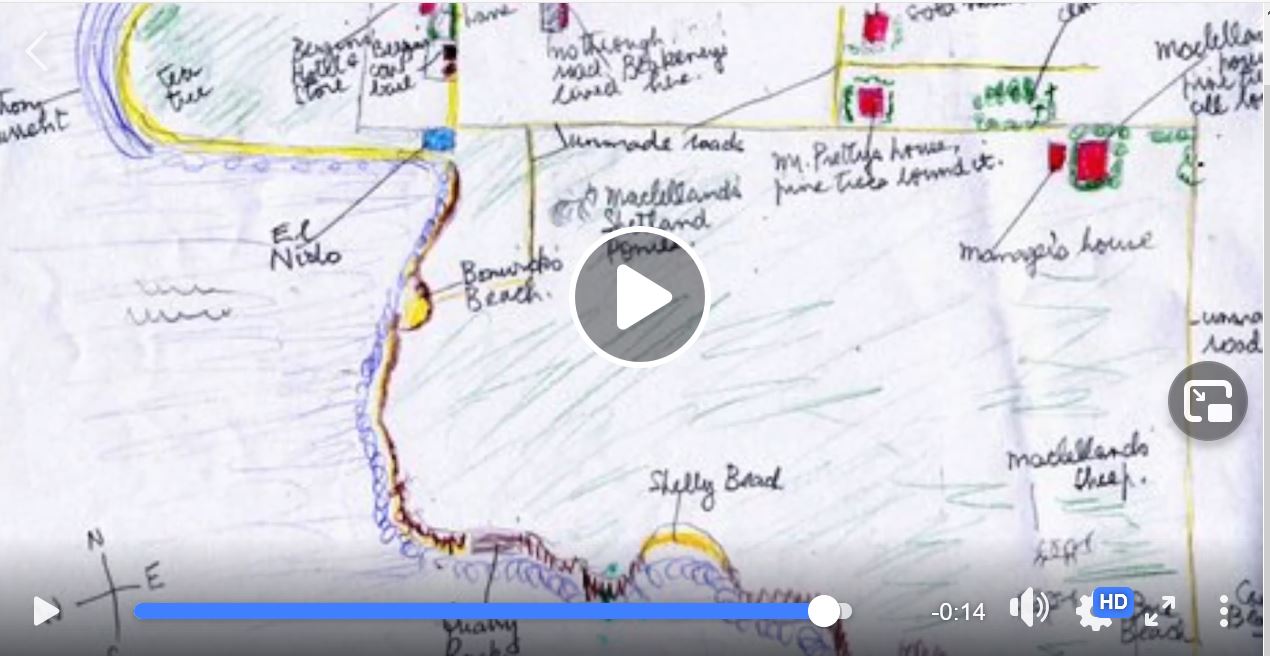 Betty's map of San Remo drawn from memory, taken from the video liked above. from the We Love Sanny FB page Nov 2020