Albert West, known as “Nip”, from a farm at Ventnor, Phillip Island, enlisted and was Taken on Strength on 2nd of July, 1940 with the service number of XV28813. He and his brother Gordon both wanted to enlist, but because they were farmers they were in an ‘essential service’, and not allowed to both go. They had to choose which one would go. The two young brothers had flipped a coin at their farm on Phillip Island to see which one would enlist. Gordon was a crack shot, and his sister Elsie related in a 1995 interview how he had a double-sided penny to toss. But in the end Nip enlisted instead.

Nip was in the 8th Division, 27th Brigade, and was eventually transferred to the 2/29 Infantry Battalion at the last stages of his training at Bonegilla towards the end of 1940. Nip married Bessie Forrest, daughter of farmers Bob and Marian Forrest from one of Phillip Island’s early settler families, on 16 October, 1940 in East Melbourne and he then returned to camp.

While he was attached to camp in Australia for 12 months, Nip’s records show that he took a total of over three months’ leave between April and June, 1941. His brother, Gordon, had developed what we now would call Meningitis, so Nip had to take leave to go back to the island to harvest and deal with the chicory crop and tend the farm until Gordon recovered sufficiently to take over again.

Along with the rest of the 2nd/29th Battalion – and other Phillip Islanders Snow Dixon and Arthur Luke – Nip embarked for Singapore on 30th July, 1941, aboard the Marnix van St. Aldegonde. This ship, escorted by HMAS Perth, had been requisitioned for troop and POW transport, having only been built in 1930 as a luxury liner for the Netherlands Company. She was later torpedoed in the Mediterranean, then collided with another ship which was also being towed to safety and both sank, but with no loss of life.

They arrived in Singapore on 15th August 1941. The 2nd/29th was then sent to Malaya to continue training. However, malaria struck Nip badly and he was in hospital and then convalescing from 23rd November 1941 until 8th January 1942. During that time the Imperial Japanese Army had landed in Malaya just after midnight on the 8th of December, thereby starting the war in the Pacific just hours before their attack on Pearl Harbour. The Allied forces fought hard but the Japanese were too strong.

Nip had been ill in Malaya and out of action 6 weeks before entering battle eight days later with the 2/29th on 16th January 1942. They had been sent in with the 2/19 to relieve the Indian units trying to defend the area between Muar and Bakri. The Japanese attacked from land and air and began encircling all of the Allied troops, who were forced to take to the jungle to retreat for their lives. The Japanese pressed so hard that the Allied troops could not carry the wounded and were forced to leave them behind.

With Nip’s lack of training time and weakness from his severe bout of malaria, he was not really prepared for what he encountered that fateful January.

Nip’s record on the 26th January indicates that as far as they knew he was killed in action on 20th January, 1942 - four days after going into action against the Japanese.

Nip West was killed during the withdrawal, in the area along the Muar Road from Parit Sulong. The Allies seemed to have seriously under-estimated the strength and determination of their enemy, and the speed at which they would advance down through Malaya. Nor did the Japanese abide by the rules of the 1929 Geneva Convention of Prisoners of War, which the Japanese Empire had signed but never ratified; as hundreds and thousands of Allied prisoners and wounded were to discover as the war raged.

Retreating, the Australian and Indian forces  fought their way through a succession of roadblocks; but Nip was among the many Australian and Indian soldiers killed by the Japanese at the impenetrable 98-mile roadblock on 20th January. Most of the dead and wounded had to be left there as the rest attempted to retreat through the jungle.

An Indian named Mr Gopal, buried the dead from the battlefield in a mass grave in a rubber plantation at Mile 101. As he did so, he removed the identification tags, making it impossible to identify the remains when later exhumed for proper burial. Nip’s remains were then interred with the others in Kranji War Cemetery, Singapore, where a headstone commemorates his name.

The wounded were murdered by the Japanese in the Parit Sulong Massacre a few days after. Their bodies have never been found; possibly washed away by the river.

In Mary Bourke’s book Keeping the Spirit Alive, her chapter on Nip West relates how Nip’s mother, known as ‘old Mrs West’, ‘was met at the ferry by Reverend Hall as she alighted at the Cowes jetty. She looked at the minister and instinctively knew her boy had been killed.

She then took Reverend Hall’s arm and said, “Don’t let me fall,” and walked off the jetty, head erect.’

“A rectangular aluminium plaque at Kranji War Cemetery, Singapore, was fashioned by an unknown Australian POW at Changi after February 1942. Nip West’s name is the last on this honour roll.” (p.182)

While Nip’s story is terrible enough, his death had a shattering effect on the island community; especially at Ventnor, where he was much-loved. The small, rural community had fared badly during the Depression and survived financially during the war by growing chicory which was used to supplement coffee supplies and manufactured into essence to make a coffee type drink popular with the American forces then stationed in Australia. Some Phillip Island farmers also had contracts to grow carrots and other vegetables, which were dehydrated and used for the Australian forces. With what money the Ventnor community could spare, they purchased a plaque and tree to locate in the Ventnor School grounds. The plaque is now to be seen in the Commemorative area on the Blue Wren Walk at the Phillip Island Cemetery. 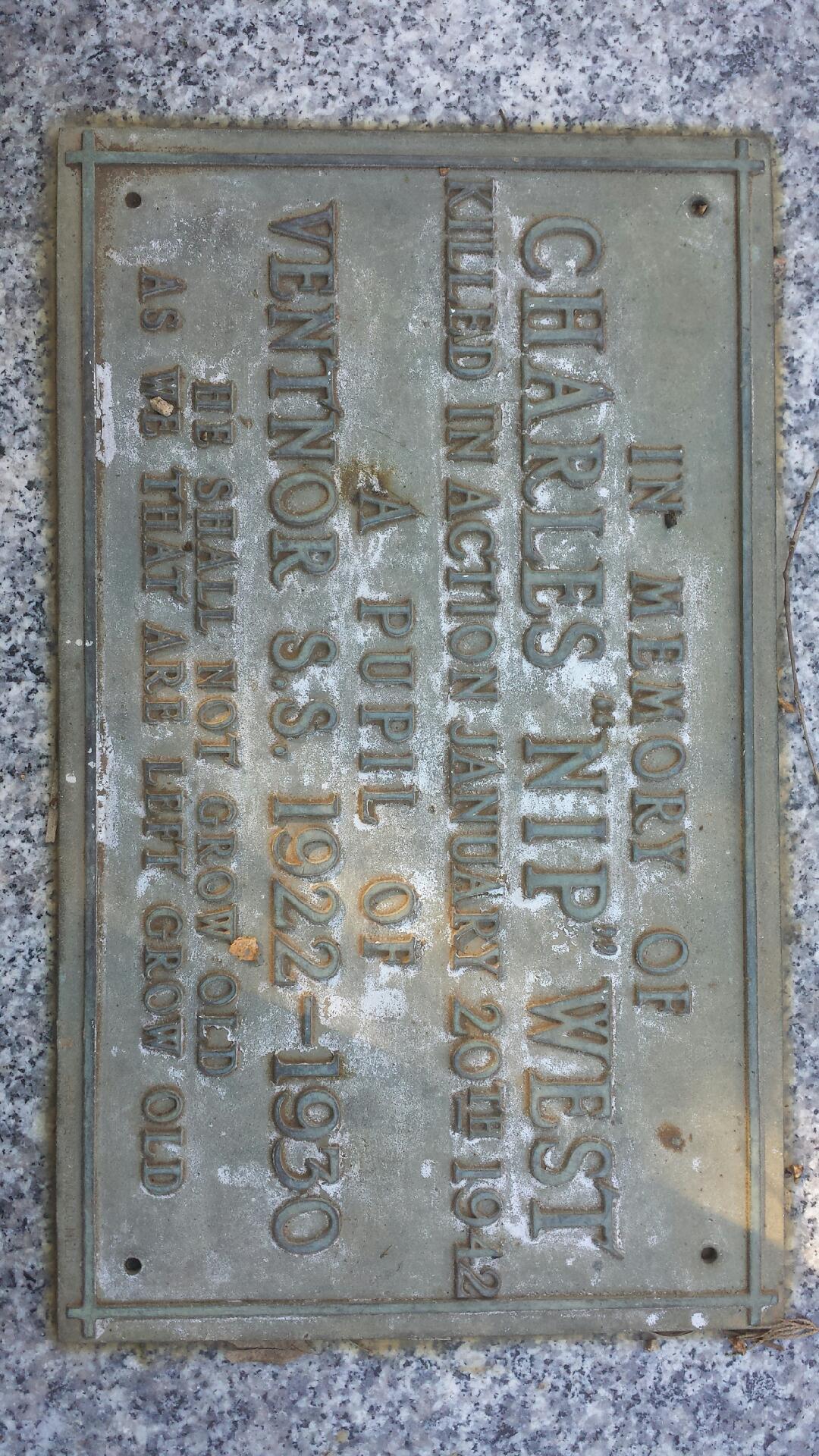