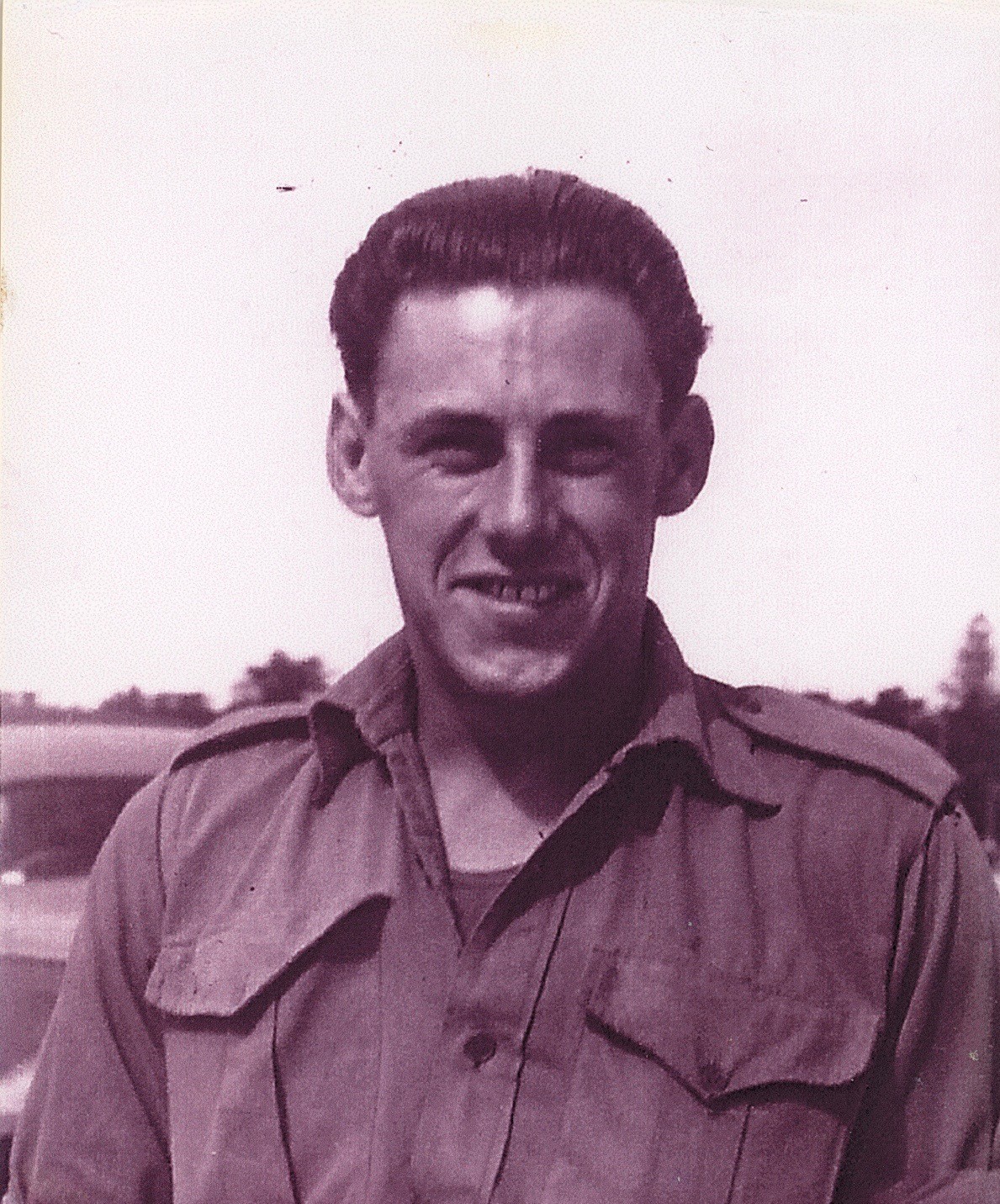 Hugh enlisted in Melbourne in November 1939, listing his employment as a “Tanner”. After barely six weeks training at both the Showgrounds and Puckapunyal, he embarked for service abroad on the 11th of January, 1940. The ship arrived in Kantara, Egypt, on 14th February where Hugh’s record shows him as being variously in the Australian Army Service Corps, Ammunition Company and Composite companies; so, he was most likely involved in the nerve-wracking work of delivering supplies of ammunition and equipment, but also of food and mail, to the different field sites.

He was in Egypt until 30th March 1941, when he embarked as part of the17th Brigade Composite Company Army Service Corps for battle in Greece and Crete to try to shore up the Greek forces in their defence against the Germans. 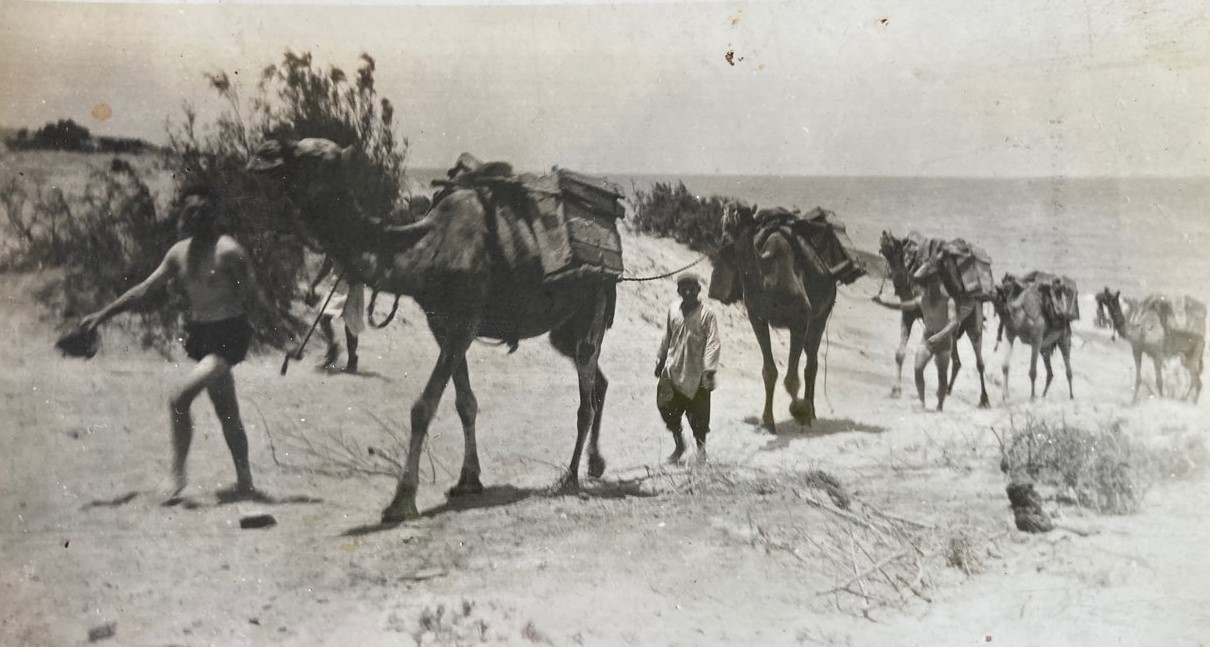 There he was reported missing on 3rd June, then officially recorded as a POW on 21st of June.

The German invasion of Greece had begun in early April, and by mid-June they had swept through Greece and Crete, and many of the Allied forces had been evacuated. However, many Allied soldiers were unable to evacuate and had to either try to escape or became Prisoners of War.

Many of the POWs from the Greece-Crete campaign were held in a few temporary camps in Greece before being moved north. Hugh appears from his record to have spent a total of three months in at least one of these transit camps.

While Germany did agree to the Geneva Convention of the treatment of prisoners of war, food was short generally, and the typical daily ration for the POWs in Greek camps amounted to about 800 calories, consisting of a little Dried or salt fish, lentils or rice, a little oil, and a hard army biscuit or one-ninth of a loaf of bread. Eventually the Greek Red Cross was able to provide extra food, and some POWs were given food through the fence by sympathetic local Greeks.

Thousands of POWs were crammed into the main camp, which filled to overflowing as more and more POWs arrived. There were no beds or blankets. Toilet facilities consisted of an open trench about 200 yards long, so dysentery quickly became a big problem.  The nearby Greek hospital was being staffed by captured British and Australian doctors who saved many a life and limb for POWs who arrived there wounded or sick from battle or the camp.

In stories related to his family about his experiences as a POW, Hugh told them that he was then transported with thousands of other Allied POWs by train north into German and Austrian camps. In their weakened condition, they had to march miles with their packs to the nearest railway station. Hugh related how all of the men were crowded together in the sweltering heat into enclosed cattle trucks, with so many sick men suffering from diarrhoea, himself included. It was impossible to lie down to rest during the week-long trip north. There were no sanitary facilities whatsoever for the prisoners during the whole week. Apart from a few stops when a meagre meal was provided, they had no sustenance.

Hugh was reported on 16th September, 1941, as being interred in the Austrian POW camp Staleg 18 in Wolfsberg, in the southern Austrian state of Carinthia.  He was officially POW number 3786 from the 6th Division of the Australian Army Service Corps. 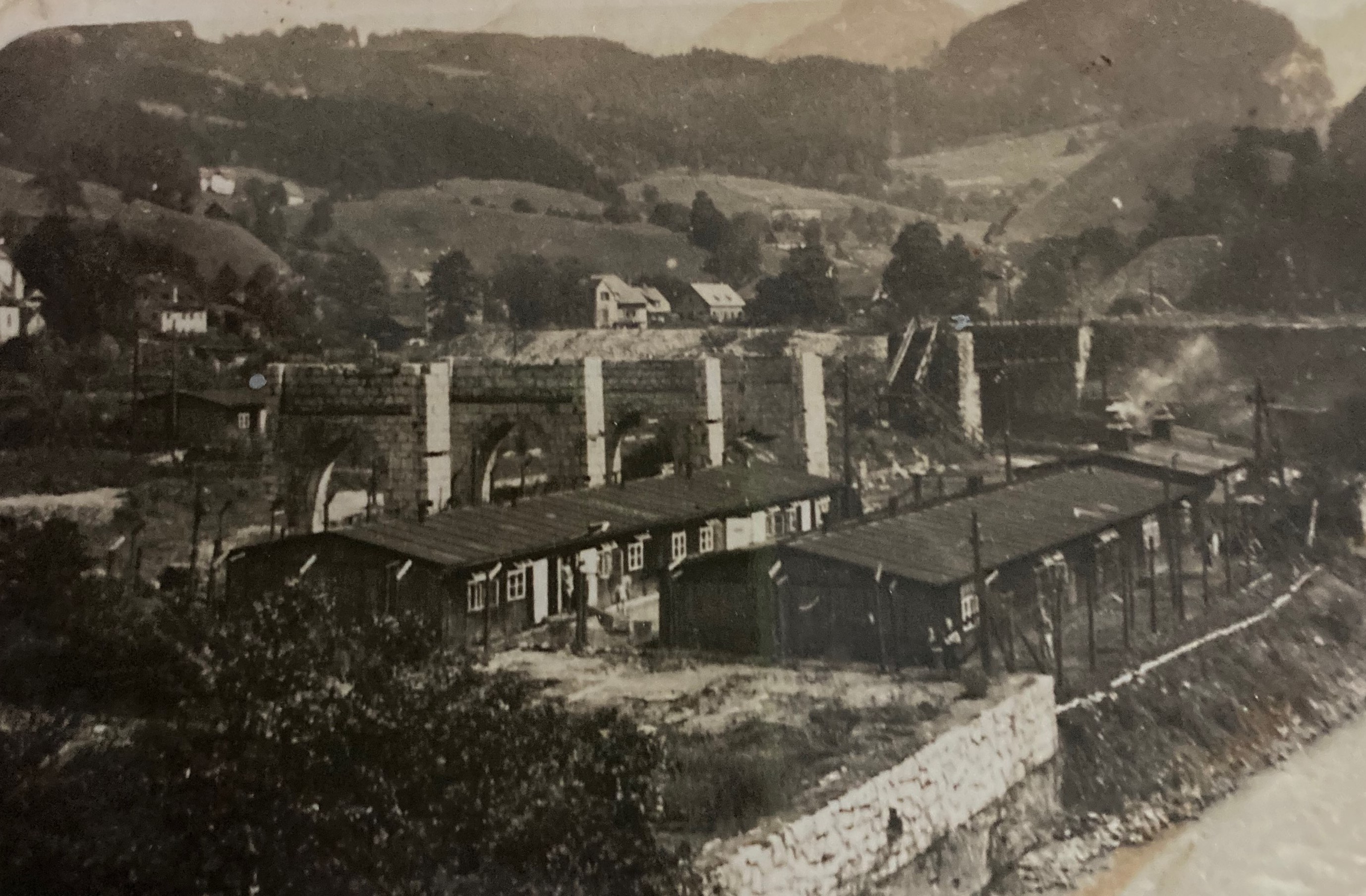 Stalag 18A where Hugh was a POW. Grigg family collection

Food in the camp became ever-decreasing, and the POWs would have struggled with malnutrition were it not for Red Cross parcels. Hugh’s POW camp experience included watery cabbage soup every day, and he could not face cabbage for the rest of his life.  For a man of 6ft 4inches he weighed about 65kg at the end of his time as a POW.

Hugh related to his family that he worked in construction in one of the 31 work parties from the camp. The Work Parties were denoted as L, for farm work, or GW for trade and industry. The farm workers were usually able to source extra food at their work and bring it back to camp in bulging pockets. Food requiring cooking was cooked using little stoves made from the metal boxes Red Cross parcels sometimes arrived in, and shared around.

When the POWs were not working, life could be extremely monotonous. While both forms of football were popular on the open cinders area euphemistically called the playing field, “Two Up” was the favourite sport. Revues, debates and educational lectures and classes were organised by the POWs, and the Red Cross and families sent books which were exchanged among the men. With co-operation from the Commandant, a newsletter called the POW WOW was produced by some of the men and distributed widely. Due to the multi-cultural nature of the occupants, the men even devised their own language, known as Lager Deutsch. 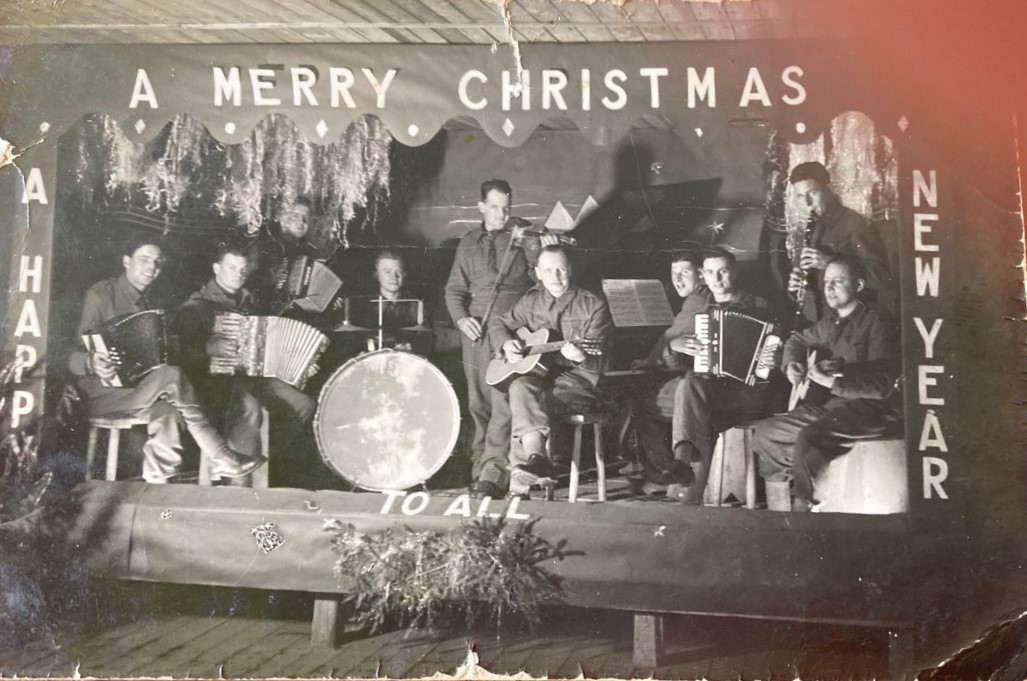 Revue in Stalag 18A featured on a Christmas card and sent to Hugh's family. Grigg family collection

POWs have related how Commandants of some camps broke the monotony by getting all of the men onto the open compound and having them stand there for an hour or two.

German guards in some camps got their entertainment by throwing scraps of bread and mouldy cheese out of the door and watching the hungry POWs scramble for it. The Red Cross did their best to provide food parcels and mail from home, but delivery to the POWs was extremely difficult, and many ships transporting the parcels and mail from home were sunk. Food parcels for one POW were often shared among many. 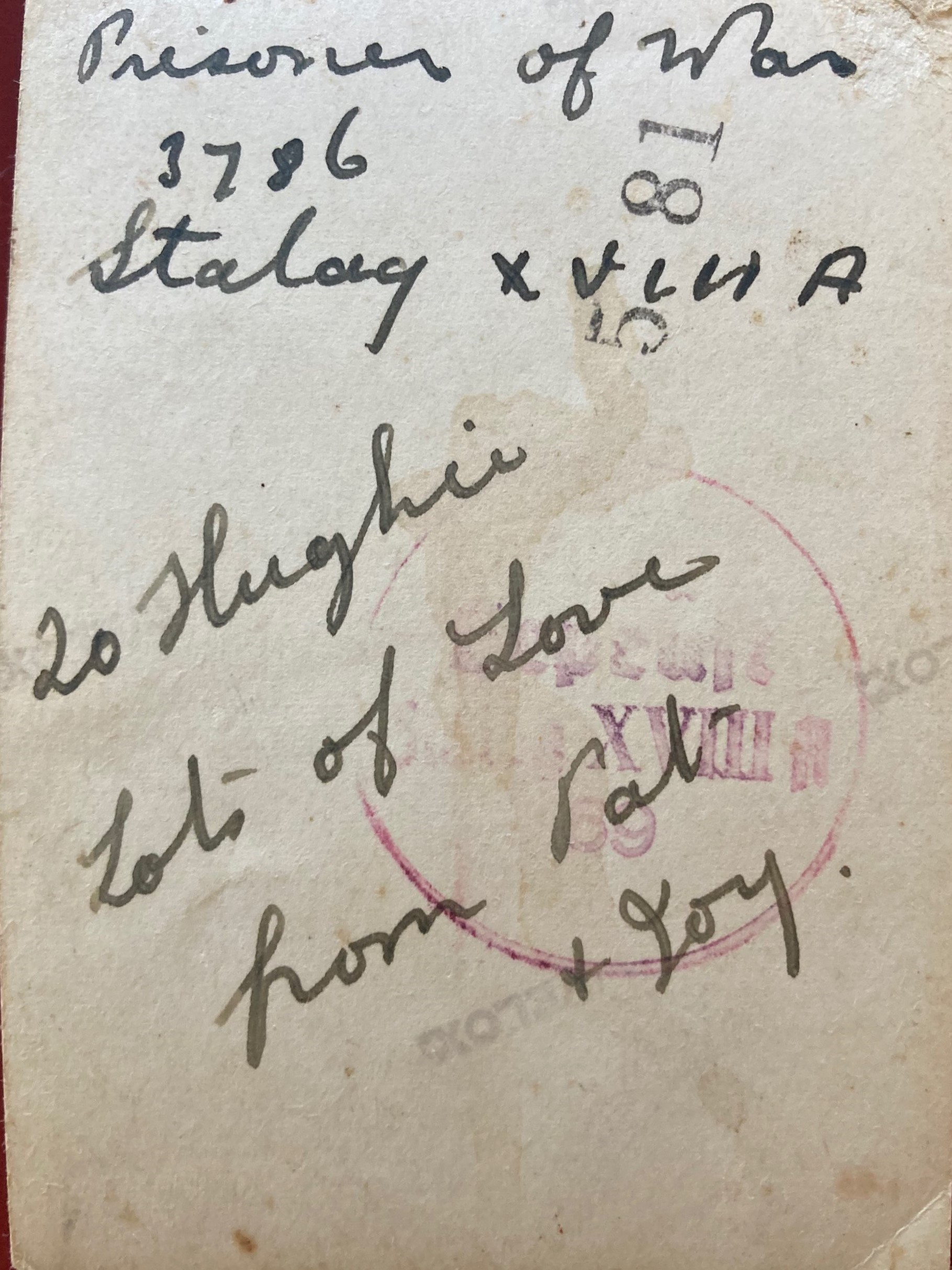 Item of mail from home that reached Hugh in Stalag 18A. Grigg family collection

Hugh related how he had tried to escape three times and was unsuccessful twice.  His captors threatened him with execution after each recapture, but he survived; although after the second attempt he was held in an underground hole in solitary confinement for weeks.

On 18th December, 1944, the camp was accidentally bombed by the US Air Force who thought it was a German military camp and dropped 36 bombs on Staleg 18A. More than 40 men were killed, many wounded, and many buildings destroyed, including the camp hospital. No doubt Hugh would have been among the POWs who scrambled to rescue others from the wreckage, then had to bury the dead. 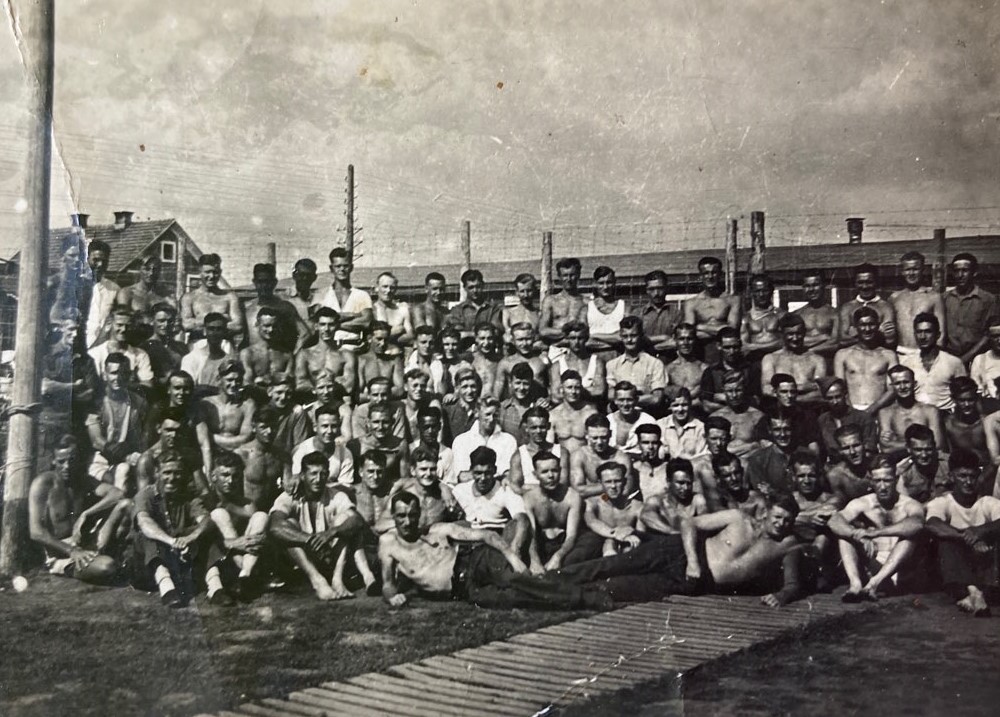 Group (including Hugh?) at Stalag 18A circa 1944. Grigg family collection

Within weeks of the end of the war, the German command gave the order to march the POWs to so-called safer areas as the Russians began invading. Thousands of the men were marched out for many weeks, living off the land as they marched. Many escaped during the marches, but to an uncertain fate due to the presence around the route of both Hitler Youth and marauding Russian POWs.

While we do not know if Hugh was forced to march, he did say that he finally managed to escape and found his way to Salzburg, where he was helped by Americans, after Allied forces had begun entering Austria on 27th April, 1945. The end of war in Europe came on 8th May when all German forces were ordered to cease active operations.

Hugh’s record shows him as a “recovered POW arrived UK ex Western Europe” on 21st May 1945. From there it took months for Hugh to finally arrive home and be discharged officially from Royal Park, Melbourne, on 24th September, 1945.

A brief video interview with Hugh Grigg (done in 1995 by the society with an Australian Government "Australia Remembers" grant), is included in a forthcoming documentary being developed by the society with a grant from the Victorian Government to commemorate the end of WW2 and the contribution of Phillip Islanders. We wish to thank the Grigg Family for their information and images for this essay and the documentary. We also thank the Australian War Memorial and National Archives of Australia.