S. S. Ventnor - the mystery lying under the Rhyll beach

When the plans for rebuilding of the Rhyll boat ramp and enlargement of the parking area were released recently, it was realized that they were prepared in ignorance of the historic ferry remains that are buried in the sand near the boat ramp.  Heritage Victoria was notified and they are going to employ a maritime archaeologist to do a site assessment prior to the commencement of any works.

This is the story of the cargo ferry Ventnor ex Oscar buried in the sand at Rhyll:

The cargo steamer Oscar, 29 tons, 73 feet, was built at Footscray for Carlton & United Breweries in 1874.  She had a scow hull, (flat bottom with hard chines).  She was owned by a Mr. White of Footscray in 1877.  Oscar carried beer barrels from Little Dock on the Yarra River to Williamstown and at the same time she could tow up to three ketches between Little Dock and Port Phillip.

Oscar was bought by the Phillip Island and Western Port Steam Shipping Company in late 1922 for carrying general cargo, and re-named Ventnor.  She ran at the same time as the larger ferry Genista which carried mainly passengers.

Ventnor commenced running in early January 1923 under Captain Jack Jansson with engineer Ian Barton and deckhand Frank Jansson.There was accommodation on board for the master but not for the crew who had to sleep in one of the railway carriages at Stony Point Station.  She proved uneconomic as she lacked a condenser to convert the steam back to water.  The only place she could get water was on the Stony Point pier which meant she had to lay there overnight to fill up.  After seven months Captain Jansson couldn’t run her at a profit so he was replaced by Captain Leonard McFee who was given a three months trial but also failed.  She was then laid up at Rhyll and was acquired by Charlie Richardson who pulled her up on the beach west of Dorward’s slipway.  He dismantled the deck and sides leaving the bottom, stern post and rudder.Gradually the sand built up over her leaving only the stern post and rudder visible. They were removed around 1980.  Her bow lies buried near the children's playground and her stern is on the seaward side of the sea wall. 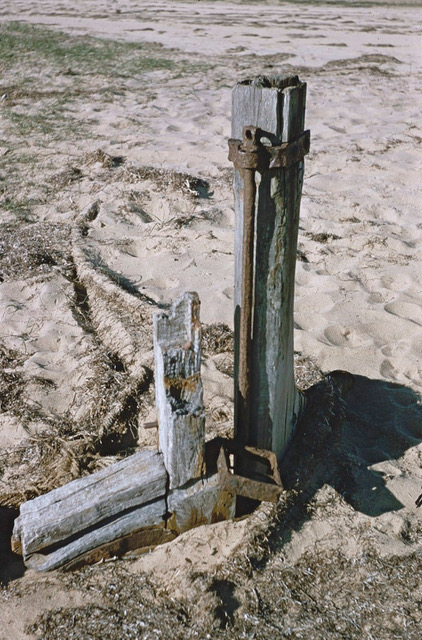 The rudder and stern post and rudder of the Ventnor were still visible in the 1980s, when they were removed. The bottom of the vessel lies under the sand.