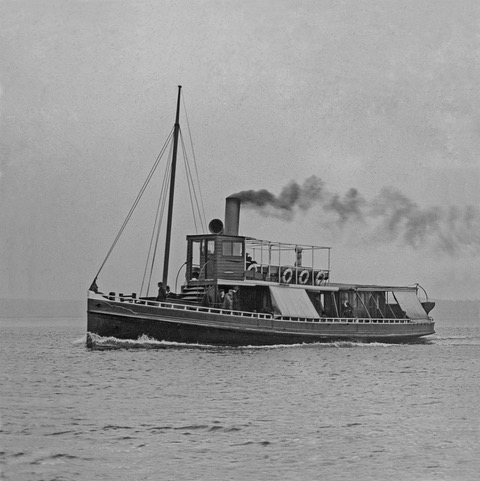 The Genista, 83 tons, 80/91x19.5x7.5 feet, ON 93522, was built in 1886 at Lavender Bay, Sydney at James Halstead’s yard under the supervision of William Dunn.  Her owner was Mr. Henry Carter Perdriau sen. formerly of the Balmain Steam Ferry Company.  Her overall dimensions were 96x19.5x5.4ft draft.  Her engines were of the compound surface condensing principle, of 25 hp., and were made by Perdriau, West and Co. of Balmain.  The cylinders were 10 in. and 18 in. diam. respectively with a 15 in. stroke.  She originally had two masts and had no wheelhouse.

She was launched on 25th July 1886.  An advertisement placed in the Sydney Morning Herald on 11th September 1886 has the Genista for sale or charter, light draft, steams 12 knots.  Perdriau and Co., 18 Erskine-street were the owners. She was registered at the Custom House on 29th September and was used initially on the daily Gosford-Sydney run until late June 1887.

On 20th May 1887 the Sydney Harbour steamers Genista and Leveret collided near the entrance to Circular Quay.  Genista was towed by the Leveret to Blue’s Point where she sank on a sand bank.  Leveret unloaded her passengers and was taking in water so was also taken to Blue’s Point where she sank alongside Genista.  Genista was working on the Watson’s Bay run and was under charter to the South Shore Ferry Company. From July 1887 Genista was available for picnics, harbor excursions, fishing parties etc.  She was back under control of Perdriau from October 1888.

The Genista was bought by the Western Port Bay and Flinders Steamship Company from Henry Perdriau.  She left Sydney for Western Port on 29th July 1889 under command of Captain George Aistrope.  (He also brought the Vixen down in 1887.)   She arrived in Western Port on 1st August.

Genista’s maiden voyage on Western Port was on 12th December, chartered by a group from various Melbourne Insurance offices.

Some time in the 1890’s the mizzen mast was removed and the wheel house was built.

John Blake Cleeland’s diary records the Genista being taken to Hastings for an overhaul on 11th October 1897 and 13th November 1898.

The Genista ran aground at Tortoise Head, French Island on 13th September 1899, and was still aground on the 15th.

The ship George T. Hay lost sails and was driven into Western Port by the gales on 28th April 1901. It was these same gales which drove the barque Artisan ashore near Cape Paterson.  The George T. Hay was towed out from the Eastern Passage by the Genista.

The Age reported: “During the terrific gale of Saturday 6th February 1904 the tide in Westernport Bay rose 13 feet.  At Queen’s Ferry it reached the houses, and at Grantville it flooded gardens near the beach.  The steamer Genista, running between San Remo and Stony Point, broke her lines from the San Remo pier, and was washed up on to the sandy beach.  She was successfully floated off when the tide rose.”

Captain George Pearce Clarke of San Remo died at Amherst Sanatorium on 27th March 1904.  He had been master of the Western Port ferries Eclipse, Genista and Vixen as well as Captain Lock’s schooner John and Elizabeth. Captain Andrew McLeod replaced him.

On 12th November 1905 the steamer Queenscliff  broke down 9 miles WSW of Cape Woolamai in a gale owing to bursting of the high pressure cylinder.  She managed to sail close to Cape Woolamai from where Captain McLeod was able to tow her to a safe anchorage with the Genista.The captain telegraphed the agents for a tug to tow her to Melbourne.

The ferry company owner Edmund Edmonds Smith died at Cowes in April 1914 and the ferries Genista and Vixen and the punt Maggie were advertised for sale in the Argus on 25th July but they did not sell.

Some time between November 1908 and 1917 the wheelhouse was rebuilt in front of the foremast.

Captain Andrew Robertson McLeod resigned from the ferry service in 1915 due to ill health and he was replaced by James Leathen Clarke, son of a previous master Captain George Clarke.  McLeod died at San Remo on 21st February 1916. He had been master of the Genista for 12 years. Clarke left for the 1st War and he was replaced by Captain Claud Philip Kerr in August 1916.

The ferries were again advertised for sale on 28th September 1916 and the Genista only was bought by civil engineer A. K. T. Sambell.

Captain Claud Philip Kerr died on the Genista at Stony Point on 9th September 1920 at the age of 40.He had been in command for 4 years.Captain Johan (Jack) Jansson was working as mate on the Genista and took over as master.

Bill Kennon’s 30ft. passenger boat Puritan, of Cowes took over the run when the Genista, was on the slip.  Her first run was on 31st July 1921 and the wind shifted to the west during the trip back to Cowes, drenching passengers.

The ketch Helen Moore commenced running from Melbourne to Cowes and Rhyll on 5th April 1922 relieving the Genista of much of the cargo.

The Genista was beached at Stony Point on 11th April 1922 to fit a new propeller which should have increased her speed to 10 knots.

The steamer Plover was leased from the Melbourne Harbour Trust by A. K. T. Sambell, from 22nd December to help the Genista over busy summer period. She was also leased the following summer.Her master was Len McFee. There was a boom in tourism during the 1920’s with 12,000 people carried on the Genista during 1923 and 25,000 on the ferries in 1926.

Repairs were done to the boiler of the Genista during January 1925.

The former pilot vessel Alvina was bought by the ferry company relegating the Genista to a secondary role.  During July - August 1925 both ferries were used in Port Phillip to take passengers out to see the visiting American Fleet.

The Genista carried building materials (bricks) between Stony Point and Newhaven for the Newhaven Boys Home during May 1927.

The Genista was converted for use as a passenger and car ferry between San Remo and Newhaven from November 1928. There is doubt whether it was used for this purpose as a small punt was bought from Charles Newman in December.  This only carried two cars.

The Genista was run on Cr. G. Dorward’s slip at Rhyll for overhaul in June 1929, the third vessel to be docked on the slip.

The Genista’s last job under Captain Len McFee was transporting drums of petrol from the tanker Vincas to the Stony Point Jetty beginning on 14th November 1932. The Vincas, of 4,368 tons carried 2,000,000 gallons of petrol for the Pacific Oil Company.  She was set up as a floating oil terminal and did not move from the mooring as she was serviced by other tankers.

Genista was then moored on the inside of the dolphin and work began dismantling her.  The local fishermen bailed out the water for a while but gave up and she eventually sank around 1935 at the dolphin on the edge of the channel. Part of the vessel was exposed at very low tides until 1966 when Ports and Harbours removed the boiler and used explosives on the wreck to flatten it.