Jack was born on 18th March 1862 in the Prastgarden (Vicarage), on the island parish of Vato, Sweden.  He was the first born of five children to Johan Eric Jansson, a tenant farmer, and Anna Stina Mattsdotter.  They were married on 18th November 1861 in Vato parish.  The family moved several times to neighbouring parishes.The third child was born in Ilsholmen, Roslags-Bro parish and the last two in Nordrona, Frotuna parish.

The family lived in a two story farmhouse at Nordrona with the cattle living on the ground floor.

Just 15 weeks after the last child was born Jan suicided by taking poison on 24th December 1869.  Lack of sunlight in winter (5 ½ hours a day) which causes lack of vitamin D and depression, combined with the severe economic hardship of the great famine of 1867-1869 were the likely causes of the suicide.  Extreme cold and drought resulted in poor harvests, rising food prices and famine throughout Sweden.  This famine and the way the authorities mishandled the relief to the poor contributed greatly to Swedish immigration to the United States and Australia.  About 1.3 million Swedes left Sweden for the United States of America in the 19th and early 20th century and an estimated 6000 Swedes were living in Australia by 1901.

The first record of Jack at sea was when he signed on the Swedish ship Ida as a cook at her home port of Vato on 28th May 1880.  His sea chest has a painting of the Ida flying a Swedish flag from the mizzen.

The next record is when he signed on the ship Foreningen, home port Harnosand as a deck-hand on 1st November 1882.He was discharged on 15th June 1883.  The destination of the ship was Australia.

The next date available is a page from a New York newspaper “The Sun” of 24th May 1885 which is in the back of a framed photo of Jack.

Jack arrived in Melbourne on 4th August 1886 as one of the crew on the Norwegian ship Ragna, Captain Simon Jorgensen, 1106 tons from Puget Sound.(Jorgensen was the father of Justus Jorgensen of Monsalvat artist colony fame.) Jack’s ships papers were lost in 1906 with the sinking of the Swan so there is no information on any other vessels he may have worked on before coming to Australia.

The second son Maths Edvard (1863-?) was at Nordrona until 1886.  Nothing definite is known after that.  A Mathias Janson, 29 years, arrived in the United States on 18th April 1892 from Liverpool on the passenger liner RMS Etruria.  The Minnesota Historical Society records have a death certificate for a Mattie Jansson in 1904.

The only daughter Klara Kristina (1867-1929) married Karl Johan Sporsen in 1912 and ran a shop in Stockholm.  They had no children but Klara brought up her niece Emilia Josefina Jansson (1903-1975) after the death of her mother.

On arriving in Melbourne Jack got a job on one of the ketches running to the Gippsland Lakes and the Tambo River.Jack met Finnish seaman John Powell at Little Dock on the Yarra River, Melbourne where the small coastal trading ketches and schooners were based.  John was running the ketch Swan for Captain John Lock of Rhyll and lived at Ryan Street, Footscray.  John had previously ran a ketch carrying tea tree from the Mornington Peninsula to Melbourne for the bakers’ ovens.  John invited Jack to his home and he subsequently moved in with the Powell family.  Jack also got a job with Captain Lock on the Swan and was supposed to have bought it from Lock in 1888.

Jack wrote to his brother Erik Fridolf (Fred) (1865-1944) suggesting he should come to Australia.  Fred got a job as cook on the barque Orient and arrived in Melbourne in May 1888.  Fred jumped ship here becoming an illegal immigrant.  He stayed with the Powells for 6 months until the Police gave up looking for him.  His naturalization papers stated he resided on board craft  (probably the Swan) trading between Melbourne and Western Port up to 1900, then he lived at Rhyll.  He married Frances Rosemondia, daughter of an Italian musician in Melbourne on 11th July 1900.

On 4th December 1889 Jack gained his masters certificate for “Home Trade Sailing Ships”.  This allowed him to be master of any sailing ship trading between any ports or places along the coast of Australia not beyond Port Stephens in New South Wales and Spencer Gulf in South Australia and any port in Tasmania.

He also became naturalized on 17th May 1890.  He took the Oath of Allegiance before a Police Magistrate in Melbourne.William Thomas McFee J.P. of Rhyll signed a certificate stating he had known Jack for three years and was a person of good repute.

John Powell’s Welsh born wife Ann was dying of cancer and she arranged the marriage of her elder daughter Evelyn to Jack.  In return Jack was to build a house for the family at Rhyll.  He bought the land in 1891 and the house was completed in 1892 by Cowes builder Alex McLardy.  The Powell family consisting of John, daughters Evelyn and Amanda and son Alfred, moved in the same year.  Jack and Evelyn were married in the home on Evelyn’s 18th birthday, 1st January 1894 by Rev. Dr. Alexander Robb of Cowes.  Amanda married Cowes farmer George Jenner in South Melbourne on 1st August 1899.  Alfred never married and lived with the family at Rhyll.

Jack and Evelyn had five children between 1897 and 1905, three who were born in the home at Rhyll, one at Albert Park and one at Port Melbourne.

He fitted an 18hp. Bradshaw engine in the Swan in 1905, the first of the local ketches to have one.  They still used sails and only used the engine when there was no wind.

Jack lost the Swan in a collision with the coastal steamer Queenscliff off Cape Schanck on 28th October 1906.  No lives were lost and the crew were picked up by the Queenscliff and taken back to Rhyll.  The Swan was carrying a cargo of William Harbison’s wool.  The story passed down through the family was that the Swan was insured but the cargo was not.  Harbison made a claim on the insurance and was paid out leaving nothing for Jack.

Jack bought the 72ft. schooner Stephen in 1907 to replace the Swan.Her first advertised trip left Little Dock on 2nd March.  The Stephen was no stranger to Western Port as she traded between here and Melbourne much of the time since her maiden voyage in early 1869 with Ike Thurston as master.

Fred worked on the Stephen with Jack for about two years. Captain Lock died in August 1908 and Fred bought his ketch Trucanini soon afterhowever he was unable to fit an engine in her so he sold it to Adelaide owners in 1909.  Fred was master of the small ketch Fidget in 1909-1910 then ran the ketch Vision which he bought in 1912, the year he gained his masters certificate.  She sprung a leak on a trip back from Merlbourne and rolled over near Flinders in 1917.  Fred and the mate Peter Hemmings took to a dinghy and eventually drifted along the coast to Kilcunda.  Fred made it to the shore but Hemmings disappeared.

The last crew member to work with Jack prior to selling the Stephen on 31st May 1920 was his elder son John Edward (Jack).  After the sale Jack junior did a seamanship course run by the Melbourne Ancient Mariners’ Club at Albert Park conducted by the marine surveyor of the port, Captain Charles Suffern.This was the same school that author Alan Villiers went to.  Jack then got a job as an Able Seaman on the barquentine Southern Cross.  She was on a voyage from Melbourne to Hobart via the west coast in September 1920 with a deck cargo of benzene which apparently caught fire south of King Island near Reid Rocks on 14th September. All hands were lost and some burnt wreckage washed ashore north of Grassy on King Island.

Jack continued running the Stephen for the new owner for several months. She left for South Australia on 17th November 1921.

He then got a job as mate on the ferry Genista running between Stony Point, Cowes, Rhyll, Newhaven and San Remo.  Her master was Captain Claud Philip Kerr of San Remo.  Kerr died on board at Stony Point on 19th September 1920 at the age of forty.  Jack took over as master but was only allowed to run her for six months as he didn’t have a steam ticket.  Captain James Leathen Clark took over from Jack in 1921.

The ketch Helen Moore commenced running from Melbourne to Cowes and Rhyll on 5th April 1922 with Jack as master for a year or two.

The steamer Plover was leased from the Melbourne Harbour Trust to cope with the summer tourists over the periods 1923/24 and 1924/25.  Len McFee was master however his ticket only covered river and bay work so Jack had the job of bringing her here and returning her at the end of season.

Jack died at Warley Hospital in Cowes on 18th November 1928 and was buried in the Phillip Island Cemetery.  An In Memoriam service was held in the Rhyll Hall on Sunday 25th November and was reported in the Frankston and Somerville Standard of 30 November.

On Sunday afternoon last an In Memoriam service for the late Captain J. A. Jansson was conducted in the Public Hall, Rhyll, by Rev. Jas. Raff, of St. John’s Presbyterian Church, Cowes.  Hymns were sung suitable to the occasion.  The preacher based his sermon on Heb. 6.19: “Which hope we have as an anchor of the soul,” and during the address referred to the faithful life of their departed friend, who, at the age of 66 years, entered into the “Haven of Rest.”

The late Captain Jansson had been associated for more than 40 years with the maritime life of Phillip Island, serving first as a young man under the late Captain J. B. Lock, who owned and sailed a number of craft in the early days of settlement in Westernport Bay.  Later Captain Jansson acquired vessels of his own, trading between Phillip Island and Melbourne.  The late Captain Jansson was respected by all who knew him.  He showed great consideration and thought for others, and exercised a personal supervision of any goods entrusted to his care.The sickness he suffered from in his last days was born with Christian fortitude and patience, and his end was peace.The preacher extended the sympathy of the congregation to the bereaved widow and family.  "Abide With Me" was sung as a closing hymn.” 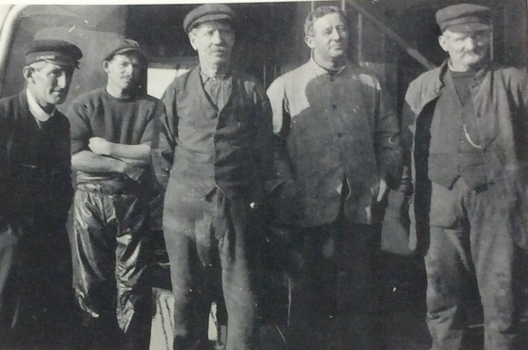