The origin of "Kennon Head"

“Kennon Head” at Kitty Miller Bay, Phillip Island, was named after either Stanley Stowell Kennon (1853-1924) or his son William James Kennon (1878-1957).  Both were boatmen at Flinders, then Newhaven from 1890, then Cowes from 1900.  Stanley built the guest house Genesta House which was run by his wife and daughters. William trained as a blacksmith but went crayfishing and did passenger trips to Seal Rocks and other places around the bay.  With his wife he also ran the Hollydene Guest House and also hired out horse drawn vehicles for sightseeing.  William bought the wreck of the sailing ship Speke wrecked east of Kitty Miller Bay in 1906 and salvaged gear from here.  William’s brother Hugh lived in a hut at Kitty Millers Bay in his latter years and fished there.  He drowned in the bay in 1959.

There are numerous descendants still here from both branches, including the owner of the local  tourist ferry John Dickie.  They are all descended from stonemason William Kennon (1812-1880), brother of James the tanner.

William sold his large passenger boat, also named Hollydene in 1946 and had a 24ft boat built, the Amy Christina, which he used for crayfishing.  Society committee member John Jansson bought Amy about 10 years ago and restored her back to sailing condition.  John’s great uncle also owned one of William’s early boats, the Puritan.  This is currently being restored at Metung on the Gippsland Lakes. Photo shows Amy Christina. 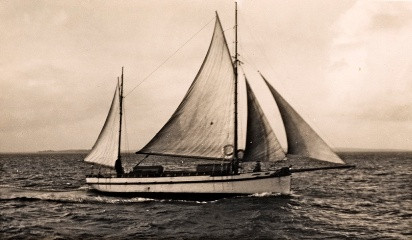